I just realized something I hadn't really thought about before: back in film days, there were no pocket- or even compact-cameras with zoom!

Funny how I got used to that without really thinking about it. Probably because it happened gradually in terms of quality. Around the millenium they could zoom, but the image quality was... let's call it Usable For Some Values Of Use. (And this Nikon 950 and its 2MP images were real dang good for the time.)

Our friend Bert made me think about it when he mentioned how today's good zooms were explained one day his compact camera broke, and he saw how much smaller the sensor was than the lens. The sensors in most compact cameras are around the size of a pinky nail!

If a zoom were to have the same size relationship to a 35mm film frame, it would be big, heavy, and expensive. And of course then you no longer have a compact camera, or an economical one. (Look at the Canon 6D with the 24-105mm "kit" lens. It's a chunk!) I am not sure what you'd have, but I don't think we ever had one! (For zoom in those days you needed an SLR, and then you might as well have exchangable lenses too.)

Of course the weakness of the small sensor is that it takes in equally less light, and so low-light shooting is an issue, one they've been battling, and quite successfully since then. By now it's pretty much only camera phone which have problems with shooting in relatively poor light. And with some (like Sony RX100 not the least) you can shoot hand-held at night, because it has a much larger sensor than any pocketcamera. 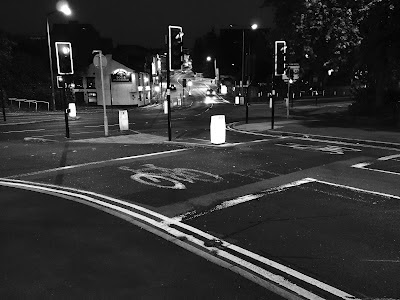 -----
In fact I'm wondering when anybody will really challenge the RX100. It's still standing in a class of its own after a year.
Posted by Eolake Stobblehouse at Saturday, August 17, 2013

Sorry, but that's nonsense.
Have you really forgotten the late nineties / early naughties when it became hard to find a compact camera with a fixed focal length lens of decent quality and speed? It seemed like all the manufacturers were competing for the longest zoom in a compact, boasting specs like "4.5-12.0/48-200 mm" (you can tell how they managed to keep that thing compact?)

Huh, OK. I guess that was a period where I was not looking at cameras much. Thanks.

If they were *called* "compacts" though, that must have been more of tradition. They can't have been much smaller than a small SLR.

Well, the race for the longest zoom clearly was misguided. And the aperture at the long end always was the Achilles heel of these cameras.
Of course even fixed lens compacts never were as small as the camera module in your phone, even say an Olympus XA or µ(mju:) II would be a stretch for a shirt pocket.
A Pentax Espio 115 with 38-115 mm f/3.9-10.5 zoom was the smallest of its time at 111 x 61 x 40.5mm and 215 g (without the CR-2 battery).
Btw., the first zoom compact from 1986 was a Pentax as well - as was the 200 mm monster.

"even say an Olympus XA or µ(mju:) II would be a stretch for a shirt pocket."

In fact it's those camera which made me impatient with how digital cameras were so big for their sensor size. Even now the sensor needs to be a quarter of the size. I guess the electronics and battery take up more space than I realize.