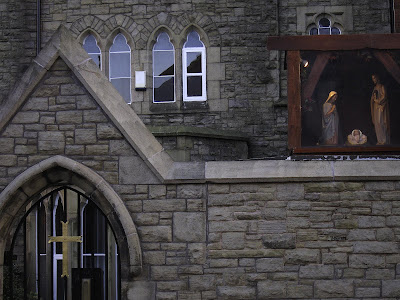 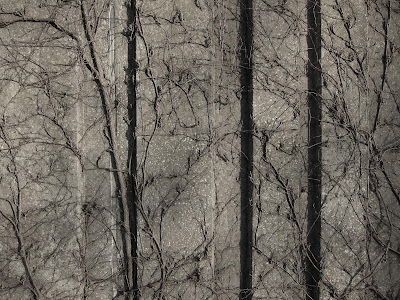 The sign below made me laugh. The good word to new cancer victims is "not a good day?" Holy frig. 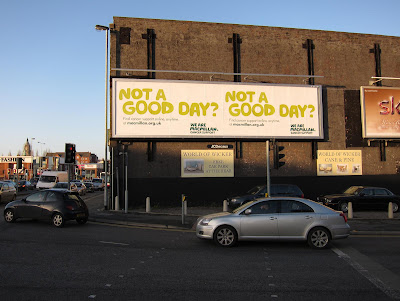 (I actually like the picture too, even though it was a snapshot caused by the sign. And the camera Canon S90 handled the contrast well, there's detail in both the white sign in the sun and in the dark street in the shade.)

I like the "take-everywhere" camera. Put it in the thigh pocket in my combats and forget about it, and when I see a subject, whip it out (the camera, please). And in decent light the image quality is the same as a large camera.

Update:
... BTW, silly me: I have set the S90's control ring to control the zoom, and it runs in steps of the old major focal lengths-equivalents: 28mm, 35mm, 50mm, 85mm, 105mm. It seems a quicker way, correct or not, to get to the approximate focal lenth you want.
... And so today when photographing the church, the 85mm-equivalent (18mm) seemed just slightly too narrow, so I also photographed it in 50mm. I'd plumb forgotten (standing on a tiny pedestrians island in the middle of a busy street) that I could fine-tune it with the regular zoom lever! (Not with easy precision, like all compacts, but still.) Weirdly, though, the zooms in the opposite direction from the lever, an unfortunate choice from Canon. (At least if you see the top of the ring to be the "direction" it is moving, which feels logical to me.)
Posted by Eolake Stobblehouse at Thursday, December 17, 2009

Nice pictures, Eo. I, especially, enjoy the stonework on the church. Beautiful.

The vine is pretty cool, too. Did you do anything w/PS on it?

The vine, apart from turning it *almost* into BW, had *no* work on it at all, no sharpening or cropping or anything.

Eolake said...
"*almost* into BW, had *no* work on it at all, no sharpening or cropping or anything."

It was taken, by the way, at the same wall (near a main road) where I took the red and green vine leaves I posted months ago.