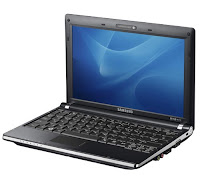 I bought a Samsung NC10 Netbook (black) today. I wanted a new toy for xmas, and I sometimes want a Windows machine (like for web site testing), and it seemed very charming and economical. And so far I like it a lot. It runs Win7 smoothly too*.
(Though it took a loooooong time for the machine to get up and running the first time, installing software etc etc. Must have been like two hours. You'd think they could just ship the disk like it is after it has all been installed.)

I thought, though, that a machine like this, which runs a full OS and has a virtually full keyboard, would be called a sub-notebook, not a "netbook"?

Though I wish I'd known about the blue version, I must say it's a very good looking machine. And it's telling of the times that you now can get a machine this advanced and this compact for so little money. (It seems to have everything, including webcam.)

Hmm, doesn't Windows have an auto-login setting, so I don't have to type in a password on reboot? I can't find it in Controlpanel. [Update: Jeff gives the answer: leave the password blank.]
What I also can't find, bizarrely, is how to change the desktop background! Searches of Control panels reveals no such thing, it does not appear on right-clicking the background, and selecting an image in IE as new background does not work...
[Update: Steven tells me the Windows "Starter Edition" refuses to do that. I think that's a really lame example of "cripple-ware". I paid a pretty handsome premium to get Win7 instead of XP, I think putting up my own desktop background is the least I can ask for!]

* Well, by "smoothly" I mean at acceptable speed, not without hitches. Seems the blue screen of death is black these days... The machine seems to crash when woken up from sleep-with-closed-lid.
Posted by Eolake Stobblehouse at Tuesday, December 15, 2009

"Hmm, doesn't Windows have an auto-login setting, so I don't have to type in a password on reboot? I can't find it in Controlpanel."

Having password set to blank (nothing) would prevent you from (easy) access to other networked Windows PCs. You could still have a password, and have Windows auto-logon.

"What I also can't find, bizarrely, is how to change the desktop background! "

Again, can't vouch for W7, but have you tried right-clicking in Windows Explorer (not IE), or viewing image in Windows Picture and Fax Viewer (should be default for jpgs).

Both those right-click options work for me.

Mind you - desktop - right click - properties- desktop should work too.

If you're running Windows 7 starter edition, which I presume you are, you cannot change the background. That and other limitations can be read about here;

I have had one of these netbooks (HP) for a while now and I think it's great. Of course it's speed, etc can't match my desktop. But knowing that, my expectations weren't huge. I use it for a small device which I take to customer sites for net access, etc., you can't beat it.

Also, I connect it to a large monitor and then to Netflix to watch movies. It's small enough so that it sits next to me on the end table.

That last bit is an interesting use of it.

It's time we ALL took a higher interest in LINUX. Windows is the vehicle that's going to look into your bank accounts and other private matters - what you buy and what you read.

Unfortunately, to properly test a website on Windows, you need to test it on at least Internet Explorer 6, 7 and 8. And you can only install one of those at a time on a single PC.

To overcome this dilemma, some people run a bunch of Virtual PC instances (using VMware or similar) on a Mac, each with a different version of Windows and/or IE installed.

However, there is an even simpler solution: Internet based renderers. For example, I use netrenderer. It is free and works very well.

Now, you can not test interactive features, such as JavaScript actions this way -- for that you still need to go the virtual PC route. But most of the time all you need is the ability to see how your website appears on different browsers.

RCMEDIA said "It's time we ALL took a higher interest in LINUX. Windows is the vehicle that's going to look into your bank accounts and other private matters - what you buy and what you read."

Don't you worry, if we all start using LINUX, then that OS would be the target. They ALL have holes in them.

"Hmm, doesn't Windows have an auto-login setting, so I don't have to type in a password on reboot? " Eolake and Jeff, please don't do this! Poor security leads to compromised machines acting as spam bots. When you ask "Why is my machine so slow?" it may be because it's sending advertisements for watches, meds etc.

George's suggestion is a much better one. Just be sure to remember you password - something only you are likely to name (but not too easy like a girl's name - too easy to guess).

Tommy: "if we all start using LINUX, then that OS would be the target."

The fact is that Linux & Mac have a fundamentally more secure architecture. Linux servers are the backbone of the internet, i.e. a big target, and how many active Linux viruses are there? Zero.

I thought these things come with Windows XP Home edition. Did you buy Windows 7 separately?

No, they sold it with XP or with Win7, a bit more expensively.