Informative article about the current state of the next-gen DVD format war.

Me, I'd go with a hybrid player. But it's a good point that it may all be a moot point... Perhaps the high-def-video-download-from-the-Internet future is already here?

Anyway, I'm shocked that apparently most blue-ray DVD titles don't use the new MPEG-4 encoding. It has four times the resolution for the same bandwidth. After Apple included the encoding in Quicktime, real-time broacasts suddenly became a pleasure to watch instead of a pain.

It seems that a key thing to developing new formats is to do it fast enough, which means dispense with all the infighting. And of course to make the right decisions. For example in the nineties they made a new format for 35mm film which would dispense with the perforation. Many of use were delighted: now we could get a bigger film image with the same size film and camera!
And it was delayed and delayed. When APS film finally appeared in mid-nineties, the damn thing had a smaller image than 35mm! And to finish it off, digital cameras were starting to appear, so, you know... 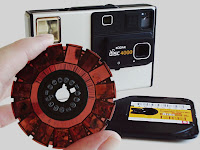 I'm always puzzled when big companies make a big investment in less quality. Remember "Kodak Disc" cameras? They took pictures on a small disk of film, and the negative was so unbelievably tiny that Kodak had to develop the "T-max" film specifically for the format, and the quality was still abysmal. I mean, we're talking big grain even on 10cm x 15cm prints! (4x6 inches). Who in Kodak thought this was a winning format? Even the handy 110 format disappeared after a while, and that negative, small as it was, was much larger than the "Disc" negative. It seems that the public do care about quality in the end, even though the differences take a while to penetrate.
Posted by Eolake Stobblehouse at Saturday, April 07, 2007

About "Kodak Disc" cameras:
Maybe they were planning on an instant-positive Viewmaster disc application? ;-)
Now, THIS could've worked! Still could, I bet.

It is my considered belief that the 110 format was the beginning of "death by focus group" for the Eastman Kodak Company, and that the Disc camera was the final death rattle. I've been in or around the photo retail business for forty years, and I believe the original Instamatic (126 format) was as close to snapshooter perfect as we got. It was downhill in print quality and utility from there.

What is "death by focus group"?