I have a Slovak/Danish friend named Miro who actually tours with Jana/Uriel (See post from a couple of days ago), and I asked him for news about her.
It seems she is as busy as ever, touring with both her bands, and has been in a movie coming up in spring, a big American/Swiss production. 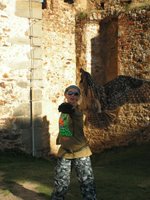 This is a fun-loving person and group... at some concerts they make a "warm-up band" called Goats of Bohemia (Bohemia is the old word for the Czech Republic). This consists of Jana herself, a dancer, and my friend Miro, all dressed up in jogging suits and goats masks, and making fully improvised music on kitchen utensils! This has been received with enthusiasm by all audiences so far.
I believe it is a mark of genius combined with great skill to be able to just get up and do something improvised and have it be really good.

Miro sent me some pictures, some of which he took himself. There is Jana with a Third Eye which Miro painted. And Jana with a big owl, by the famous Tocnik Castle. And Goats of Bohemia in concert.
Posted by Eolake Stobblehouse at Saturday, February 03, 2007

I don't care what language or country she sings in, that woman's talented. And eclectic : whatever style she chooses, she's good at it. I hope that big movie brings her fame, because she definitely deserves the recognition!

Interesting that she took the nickname of an archangel, Uriel. :-)

Interesting that she took the nickname of an archangel, Uriel. :-)

Archangel? Uriel? What book are you reading?

Uriel (אוּרִיאֵל "Flame of God", Auriel/Oriel (light of god) Standard Hebrew Uriʾel, Tiberian Hebrew ʾÛrîʾēl) is one of the archangels of post-Exilic Rabbinic tradition, and also of certain Christian traditions. His name may have analogies with Uriah. In apocryphal, kabbalistic and occult works Uriel has been equated or confused with Nuriel, Uryan, Jeremiel, Vretil, Sariel, Suriel, Puruel, Phanuel, Jehoel, Jacob, Ezrail/Azrael and Israfil/Raphael. The angels mentioned in the older books of the Hebrew Bible are without names. Indeed, rabbi Simeon ben Lakish of Tiberias (AD 230–270), asserted that all the specific names for the angels were brought back by the Jews from Babylon, and some modern commentators would tend to agree. Of seven archangels in the angelology of post-Exilic Judaism, only three, Gabriel, Michael and Raphael, are mentioned by name in the scriptures that gradually became accepted as canonical."

תודה Tóda (thank you) for sparing me the explanation, Rabbi Eolake.

i had a feeling something was amiss here.
ok, that explains that because in the greek there were only three named, lucifer, michael and gabriel.
no others were ever mentioned in the KJV.

Well, the Catholic Church also displayed great creativity in coming out with names and types of angels. Uriel is mentioned on that page about christian theology.