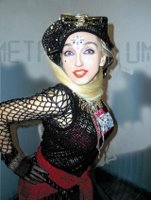 One of the most seminal and powerful artists you are like to hear about, or more likely not, is Jana Pope, a.k.a. Uriel, a.k.a. JANA KRATOCHVÍLOVÁ. She really should be big world wide, but she is best known in her home land the Czech Republic, where friends helped me dig out new material from her after I started a search for this artist who I became a big fan of back in the eighties, and who is still the only musician I've sent a fan letter to. (Small fib there, I sent one to Iggy Pop too, but he invited it on one of his records.)

Here is one of her most melodious songs: Santa Maria.

And here is one of her most brilliant hard rock songs: Time 4 Revolution. This is from her separate band, the ultra hard-core Illuminati. If you like industrial hard rock, this is the uncut stuff.

I know!!
It should be a classic.

What is the context behind the Illuminati, Blue Messiah, Jana's distorted vocals, Divine Rage, Jana's costumes?

I don't know. I guess they are just having fun with it.