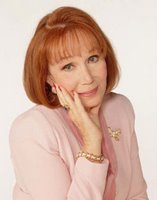 I'm a Katherine Helmond fan.
For one thing, in Everybody Loves Raymond where she's in her seventies, she is still a good looking woman, very lively and a wonderful actor.

For another thing, in her big role as Jessica Tate in the groundbreaking seventies sitcom Soap, I see her as the moral and loving epicentre of the show. Jessica Tate may be ditzy and a scatterbrain, but she is the embodiment of an Innocent person.

You saw her occasionally be angry at people who did her wrong, and you saw her make necessary decisions like throwing out her husband Chester after he proved well and good that he just couldn't stop being unfaithful, but you never saw her judge people or hold grudges. It was just not in her. Her heart was bigger than an ocean, and everything and everybody had a place in it.

It would take a lot of work and wrongdoing to even get her to push you away, and even then she never hated you, it was merely self-preservation.

I seem to recall that Katherine was on Danish TV (the series was huge in Scandinavia, where nobody could see anything immoral about it) telling us how Soap had ended prematurely due to big pressure from holier-than-thou groups like The Moral Majority. To Europeans this seemed incredible, the show was so innocent and fun.
Posted by Eolake Stobblehouse at Tuesday, January 30, 2007

I loved her on Soap. I wish they'd release the series in PAL format, in addition to NTSC.

So you brought the CAPTCHA back, eh?

I had to look that up:
"CAPTCHA
(Completely Automated Public Turing test to tell Computers and Humans Apart) A category of technologies used to ensure that a human is making the transaction online rather than a computer. Developed at Carnegie Mellon University, random words or letters are displayed in a distorted fashion so that they can be deciphered by people, but not by software. Users are asked to type in what they see on screen to verify they are, in fact, human."

So you don't have a region-free DVD player?

So you don't have a region-free DVD player?

I do. But I prefer the higher image resolution offered by PAL to that of NTSC.

I've noticed that most popular US TV shows are released on PAL sometime after the NTSC version. Of course, there's no guarantee on the quality of the production of the European release -- often it's just as bad as the NTSC version. But, depending largely on the original master, it can be much better.

But I prefer the higher image resolution offered by PAL to that of NTSC.

Surely that doesn't matter for a TV show that was recorded in the late 70s?

Surely that doesn't matter for a TV show that was recorded in the late 70s?

Good question. It matters if the original master (from which the DVD is produced) is in a format that has more resolution than standard interlaced NTSC. Whether this is the case depends on several variables. Also, the transfer process matters, i.e. what kind of digital restoration is done etc. PAL has 100 extra scanlines. So any additional picture information the transfer/restoration can produce or create, PAL can represent better.

For us Europeans it may also matter in that when watching NTSC programming using a PAL TV set, the NTSC-to-PAL conversion often happens in a less than optimal way in what's known as pseudo-NTSC.

And for programs originating from Europe (i.e. created in PAL) an NTSC version obviously loses a significant amount of the original picture information, regardless of the year it was produced.

I've bought quite many DVDs from the states, and I can't say I've noticed any difference. It must be there, but it hasn't jumped out at me.

Katherine Helmond was a great actress but the show SOAP was anything but decent. It was vulgar to put it mildly. Sorry to burst your bubble Eolake.

If you found Soap to be vulgar, you must have big issues with a great number of modern TV shows and movies.

Hey, Bill, my lil' bro'!
If you wanna burst a bubble, ain't nothing better that a good hammer blow, yo.

eolake said...
If you found Soap to be vulgar, you must have big issues with a great number of modern TV shows and movies.

Honestly Mr. Stobblehouse it wasn't the moral majority that just had issues with SOAP, it was average Americans as individuals. (Non church going folk I will add)
The script was non-amusing, the characters cardboard, the plots were full of depravity often mocking decency and such.
It was a flop sir. No offense. Glad you like it. I don't think they even broadcast it in syndication anymore because it just wasn't worthy enough for it's time.
Best to all.

Hmm, I must have watched a different show.

Wikipedia contains some interesting info about the controversy surrounding the programme.

You forgot to mention that this work of Satan had excessively long and numerous commercial breaks, where the sound volume was markedly increased, and some of which advertized for sinful lace women underwear.
In fact, I believe Ms Halmond is a witch, related to infamous youth-perverter Harry Potter.

I have officially requested from His Holiness Benedict XVI a mandate to seize and burn every material related to this series, granting me carte blanche to detain and (ahem!) "question" people related to it in the Guantanamo Fortress. This world shall be cleansed, my brothers!

Jill Johnson,
I love the delicate way in which you argument a point. You definitely have me convinced!

Almost me too. Only thing is I have watched all four seasons, every minute of every episode, and I have yet to find a single thing I found depraved or offensive.

It really doesn't matter if everyday american folk found it offensive. They're not far removed from their puritanical roots. And although we are slowly becoming a more reason-based, progressive culture you can still see traces of our conservative past in nearly all aspects of society.

The point? The opinion of the majority does not always have the ring of truth. Just because people thought it was offensive a few decades ago it doesn't mean they actually had reason to be offended.

I've never seen this series, but as far as I can tell the reason people would dislike it is because it actually dealt with sensitive subjects rather than simply denying or condemning them as we'd done for centuries. I'm not saying this is the case, I'm not qualified to make that judgment. This is merely what I have observed in people of our modern age when it comes to things which push the boundaries now. The specifics differ each generation but the underlying factors are undeniably the same.

This used to be one of my favorite show to watch when I was a kid. Admitedly most of the jokes probably flew right over my head but it was still quite funny. I may just pick the series up if I ever get layong around cash.

And Katherine Helmond's role as Mrs.Lowry in Brazil really creeped me out.

In fact, I believe Ms Halmond is a witch, related to infamous youth-perverter Harry Potter.

I always had a feeling that there was something "dark" about that woman. Thanks for the info friend.

Lucid Twilight said...
It really doesn't matter if everyday american folk found it offensive. They're not far removed from their puritanical roots.

That's where you're mistaken. References include but are not limited to atheists, pagans, agnostics, tree lovers, carnival workers etc.

I see her as the moral and loving epicentre of the show. Jessica Tate may be ditzy and a scatterbrain, but she is the embodiment of an Innocent person.

Innocent? OMG! Moral? In who's world Eolake? (Friday the 13th episodes?) I can't believe you bought into that veil of deception.
But to each their own. (Shivers)
Be good to yourself and turn the dial sir, your mind is better than that. Have a nice day.

"That's where you're mistaken. References include but are not limited to atheists, pagans, agnostics, tree lovers, carnival workers etc."

So? Many of their values are still derived from social conditioning, and our social conditioning retains many of the puritanical aspects I spoke of. Nudity, for instance, is still quite the taboo. It's becoming less of one, but it's still clearly seen. And a couple decades ago I'm sure it was much clearer than it is today.

Santo,
There's nothing wrong with women's lace underwear. I love wearing mine (especially when my BF slowly slips them off of me and rubs them on his joystick (for me) snickers before we make love!
Lighten up Santo, it's okay baby. Release. Relax. Let go honey. Enjoy the fruits of eroticy. Peace to you my love.
sinful lace women underwear?
it's only sinful babe if you let it go without enjoying it ya know darling?

Nudity, for instance, is still quite the taboo.

Where Lucid? I see not this in the city of my people friend.
Nudity is common and quite refreshing :)
If I had it my way, I'd desire everyone stay naked lol. It's no taboo young lad. In time you will see my youth.
But I understand your misconceptions. Many do young man. Have a good day please :)
Now I must get back to looking at my DOMAI PICS :)

Mrs. Candy, which city are you in? Most cities I know you get arrested right quick if you undress in public.

Jill,
Torquemada was the name of the bishop in charge of the Spanish Inquisition. I think somebody either has serious puritanical issues with sexuality in general, or more likely was pulling your leg.

From the details of the post, I'd say the latter is far more plausible. (A witch related to Harry Potter? Come ON!) I'm not sure about those Henry brothers, though. :-)

I understand SOAP was also a parody, and those not realizing that fact were likely to find it mocking and two-dimensional, like all parodies. These are not meant to appear profound.