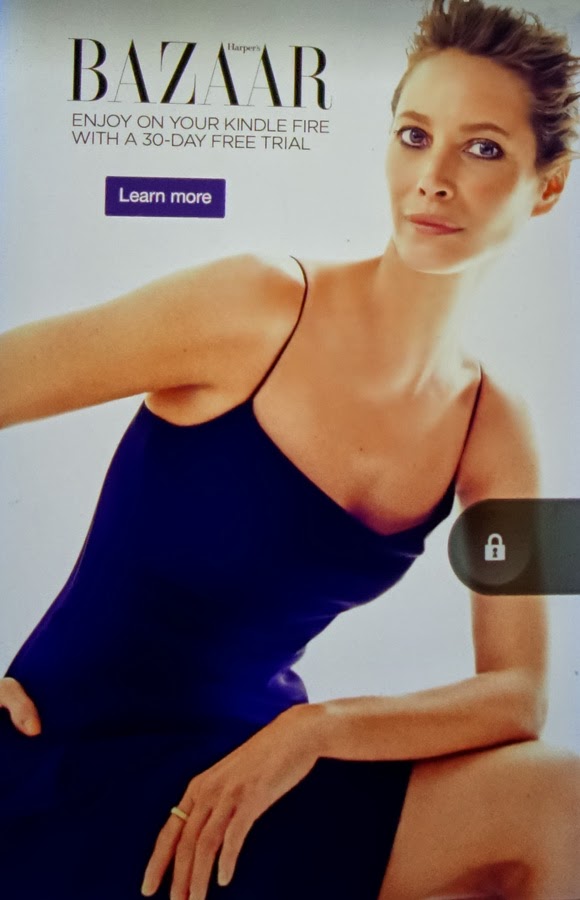 I think the lesson is not so much to blame or attack the fashion industry or the food industry or anybody else, but to realize that we have deep destructive impulses, including self-destructive, and recognize them and see the for what they are. This all takes time and work, perhaps even therapy for some, but I think it's the only way to really change things.
Posted by Eolake Stobblehouse at Tuesday, March 11, 2014

Her neck is too long and her head is too far to the right, and looks too small for her body. I suspect that that's only the most obvious photoshopping that has gone on here. Imagine meeting someone who looks like this, someone's distorted view of what a 'perfect' human being should look like. Scary indeed.

And she barely has breasts, and the shape of her skull is too visible, to my taste.

They want someone androgynous, who is still somewhat good looking in that sexless way, to fade into the background, like a blank in Scrabble, or like the way Jason Bourne's averageness allowed him to be invisible.

P.S. What if there wasn't any Photoshopping and she really looks that way. I thought the whole point of domai was all women are beautiful (yet oddly almost all domai women are mid-20s and white).

Though I don't think I ever said that, I was always looking for more variety in race, age, and type for Domai. But it was surprisingly hard to find.

Like a store mannequin basically, but one that can move, but I mostly agree with you.

Though I don't think I ever said that, I was always looking for more variety in race, age, and type for Domai. But it was surprisingly hard to find.

You could make a lot more dough branching out - there's a market for GILF, Asian, black, etc., and if you can stomach it dudes, too, though personally I'd rather not tap that market.

You could make a lot more dough branching out - there's a market for GILF, Asian, black, etc., and if you can stomach it dudes, too, though personally I'd rather not tap that market.