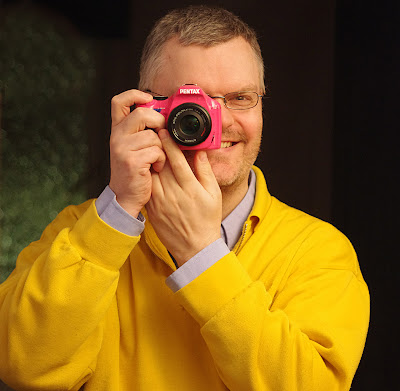 Love the contrast between the sweater and the camera - the colors really set each other off! :)

With a super-macho pullover !

Gee, I didn't know that photography could be a fashion statement. ;-)

all three of you.

Woah, woah, calm down, ya crazy mofo! I ain't messin' wit no crazy ass fukka wit no yella sweata an no pink camera!

---
Anna, yep, only a guy who's really secure in his masculinity can dress like that.

Haha! I guess not, it's been thirty years since I tried being anything else.

Yeah, the sweater is even more macho than the camera.
Even though I didn't think it possible! :-)

"Anna, yep, only a guy who's really secure in his masculinity can dress like that."
Yeah, Anna my bro, like the big guy said.
He's even more secure about it than "Quicksilver" Freddie Mercury, he is.
(But maybe not quite as much as that hunk of a he-man Dr Evil, baby!)

"Being 6'4" doesn't hurt either.
Haha! I guess not, it's been thirty years since I tried being anything else."
Gee, Captain my Captain, you're so BIG, sweetheart!
(I like big men.)

P.S.: How about this guy? Ha ha ha, talk about pathetic closet GAY!
WAY overdoing it, so ridiculously fake macho it SCREAMS of GAY. ROTFWL!

Speaking of "big"...
One of my earliest internships was in Urology, and our chief Doctor was both highly competent and a hopeless motormouth. And it so happens that several of the nurses were nuns (from some charity order or something). They gradually grew weary of the boss and his foul language, and decided that the next time he uttered a profanity, they would all ostentatiously leave the room to take a stand. The next day, at the morning round, he arrived telling us how the Harbour Authorities had called hin because of a suspected VD epidemic aboard a philippino cargo: "I had to order all the men lined up on the bridge and have then strip for examination. But you wouldn't believe this. These philippinos, they're so runty, they're short, skinny, small hands, small feet, but boy, they've got the absolutely HUGEST set of..."
At that moment, all the nurses covered their ears with their hands and left the room running in one swift synchronized motion, while the boss yelled after them: "Hey, no need to run like this, the cargo's staying docked for three more weeks!"

C'mon, did that really happen to you?

You look handsome with pink and yellow. I like the color combination. I can see the outfit on Valentine. I will add your blog to my blog rolls with updates. Thanks!

Hey I just noticed you are in UK. How do you get a fully-crazied colored one?

Had to go abroad, here.

"C'mon, did that really happen to you?"

The trick in telling a good joke lies in making it sound real. ;-)
But our Urology Chief of Service WAS a bit like that in his conversation. Extremely frank of tone. Also a fiercely competent man.
The nurses never left running (the nuns were actually in Neurology and General Surgery), but they did hear some pretty embarrassing stuff on a few occasions. Urology includes Andrology, the male equivalent of Gynaecology... :-)
An' dat's no lie, shugah.

Dr Edward Chalouhy (you can google his name for some major international research articles he published) is one of my two most admired Professors. Along with the rather famous guy who first nicknamed me "the Philosopher".