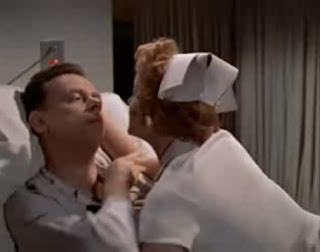 The Seven Year Itch.
I never realized how funny this film is, or I'd have watched it long ago. I ripped this clip for you, priceless.

There's a Making-Of on the DVD, and it's amazing to hear about censorship in the fifties. They actually had rules like "adultery must not be made the subject of comedy or laughter". Good friggin' gawd.

Walter Matthau was wanted for the role by director Billy Wilder, but he was an unknown, and the studio did not want to take a chance with him. Stupid decision, that would have been so great.

This film of course is the one with the famous scene where Marilyn's skirt blows up. And I was reminded of on day in Copenhagen, walking with my friend Bettina. Near the main station is a street which becomes a veritable wind tunnel when the wind is right, and we were crossing this, and suddenly Bettina's skirt blew up, all the way up, revealing her small red knickers. Some young men passing looked like gold had suddenly fallen from the sky. "I can't believe it!" one of them exclaimed delightedly.
Posted by Eolake Stobblehouse at Wednesday, October 31, 2007

I hope that she felt very proud about it, wouldn't she? Have you ever seen her nude or semi-nude? what is she doing nowadys/ Are you still in touch with her or not? Please tell me.

I can picture the scene. Must've been very cute. :-)

Hey, it could've been worse. Nowadays, many women don't wear any knickers. "Oops! I did it again", to quote one of them.

Or, to make the scene really traumatizing, it could've been YOU, wearing a kilt, the "traditional way"...

(Forgive me, Lord, for such brazen mental sinning! I promise I won't do it again. Not too soon, I mean. :-)