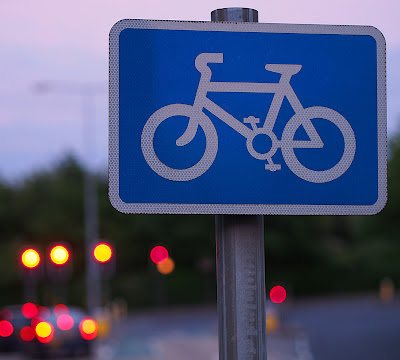 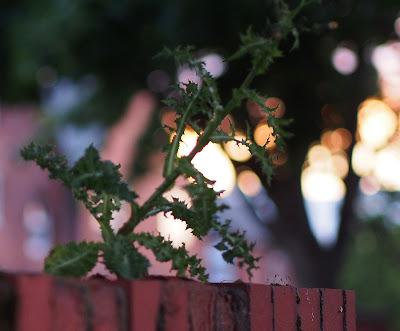 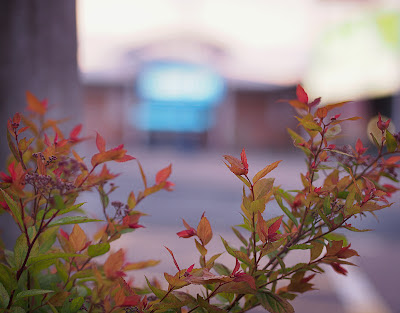 (All are clickable. The middle one especially shows much better large.)

Photos with "bokeh", or soft background blur can't generally be produced with pocket cameras, one of the few downsides to them still*. The bigger the sensor, the easier you can get nice soft background blur. The new mirrorless cameras, like Micro Four Thirds for example, have smaller sensors than traditional film (half the size of a 35mm film frame ("full frame"), linearly, one quarter area-wise), but with the right lens you can still get this effect. 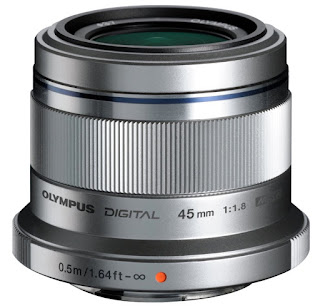 *Even here, progress is made. The Sony RX100 is pocket-sized but still manages to have a sensor large enough to get some background blur if you want.
Posted by Eolake Stobblehouse at Sunday, June 17, 2012

That sure is a great camera+lens combo! Well done.

Not the dreaded unmanned bicycle crossing!

I love your photographic sense. You've got such a good eye.

I am 75 and I see the pics as a metaphor for life. Diminished in brilliance yet striking.

Very nice! Thanks for sharing these.

The thistle in the middle shot - does it have big purple or violet flowers when they come out?
We have some here that do, and they can grow quite large and tall.
We've always called them 'Scotch Thistle' but I don't know if it's the right name or not.

Eolake, very nice. I like the clean look of the foreground compared with the out of focus glimmer of lights in the background.

I, especially, like the bokeh of the first one, Eo, and...I agree w/Karin; I never notice stuff, much, until I'm shooting. Cool! :-)

I agree with TC[G], the bokeh is sublime. I love when traffic lights are in the background; especially when it's raining.

Beloved friend Eulake,thanks so much for your pictures.The blue bicycle image it's more than magic,all the colors,the lights are like in a fairy tale.=D Life is a daily Miracle.Universal Love is an Eternal One.=D

Yes, nice bokeh, background blur, is what one misses with pocket cameras. And even on M4/3, if one wants it, one should get a fast prime, because with the slower zooms one doesn't get much, and if it's there, it's usually not all that soft.

The bicycle sign: Dusk is my favorite time of the day. Lights are just coming on presaging an evening of enjoyment of people, place, food, music, fun. You can sense the action that is about to start.

The first photo I got confused, the streetlight in the background looked like a reflection in a window in the foreground.

The circles are "too perfect".

I'm now inspired to go out and shoot better ;-)

You've certainly gathered a nice group of mindless sycophants, Eolake! This seems to happen in all blogs, sadly.