Girl with a Leica 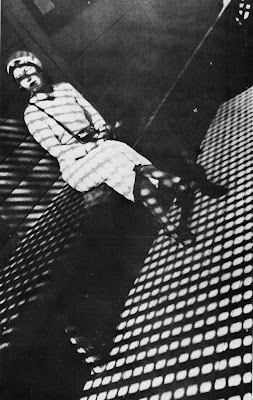 New Yorker Article about the Leica mystique. A bit breathless, but perhaps interesting.

I am not at all sure if the Leica is still really justified. The main reason for its original development was to create a super-compact camera. This succeeded admirably, but since the seventies the world has been awash with even more compact cameras, and many in fine quality.

Another reason was the quietness of the Leica. But according to reports, the new Leica M8 is actually noisier than some DSLR cameras.

Then there is the viewfinder, which in the seventies was much, much bigger and brighter than SLR finders. But times have changed, and SLR finders are very big and bright now. SLR viewfinders don't, sadly, show the world beyond the picture frame. But on the other hand they show just what you get, even with a zoom lens, and the picture is equally big even with a tele lens.

Then there's the excellent rangefinder system with a wide base. All well and good, but not only are SLR finders improved, they also have autofocus now. Admittedly reports are mixed as to whether this is faster than good autofocus for all people and situations.

Then there are the amazing (and very expensive) lenses... This is ironic, because the original Leica was a huge compromise in image quality, compared to large-format cameras which ruled 80 years ago. So now it has become the high-end alternative. And yet most people will not be able to tell the difference between a Leica M8 picture and one from a DSLR at half the price.

It's a weird world.
Posted by Eolake Stobblehouse at Saturday, September 22, 2007

The picture here reminds me of something you might see in a Hitchcock movie. :o)

I like Leica - and if it were only for the brand name LEICA, which refers to the manufacturer of the cameras: Ernst LEItz CAmera Werke, Wetzlar, Germany, where the camera was originally produced.

Pronunciation guide: Leica as in "to like" plus an "uuh".

Please take one more factor into account: the way the camera balances & feels in your hands. Every (half-price!) DSLR is a clunker compared to the ergonomics of shooting with a Leica.

Unobtrusive street photography isn't what it used to be. Now it's ubiquitous, and mostly from our cell phones. I don't think we have an equivalent to a Leica in digital photography yet, although we're coming closer with a few of the newer RAW digicams.

Here's something, though: How many shutter actuations did a Leica take before needing repair, and how fast did we reach that number compared to modern DSLRs and digicams? And can we expect any of the latest greatest digital cameras to survive as long as those old Leicas did?

I am sure we can't. But then that goes for the Leica M8 as well. It comes with the electronics territory, for better or worse.

Here's a question: Why can't an SLR have viewfinder that's bigger than the actual image recorded? With guidelines like the Leica to indicate the area that will be captured.

I'm thinking of the crop-frame DSLRs in particular with their relatively small finders. Couldn't they use the same size pentaprisms as 35mm SLRs and show the cropped areas inside the frame, thus giving us the Leica benefit of anticipation?

Interesting point. I would like to see it done.

Given that very few cameras even show the full capture image (usually 95% or so), it seems that every bit of added finder area adds cost and bulk.

I think the Nikon D3 can capture in APS format, with the outlying areas greyed out in the finder. This may actually do what you talk about here, in practice. (Except the resolution is only 5MP when it does this.)

I'm sorry, but the writer of this article doesn't know enough about "rangefinder photography" to warrant the cyberspace he's using. You don't justify the "validity" of the Leica by comparing it to an SLR. One has absolutely nothing to do with the other.
Why can't people get this? Well to answer my own question, it's because SLR "only" photographers evidently have some kind of superiority complex - yet are not experienced enough in photography as a whole to even know that any one kind of camera is not the perfect choice for "every" job. People like this remind me of a framing carpenter ridiculing a drywall hanger for not using the same hammer he does.
If you want to discuss the "validity" of the Leica, compare it to another rangefinder camera, not an SLR camera!!!!!!!!
However, if you want to discuss the "vallidity" of rangefinder photography, you'd better know at least what it is. The writer of this article obviously doesn't since nothing mentioned in the article had anything to do with it.
Big Hint! "Rangefinder photography" is a shooting style, not a piece of equipment. "Leica M" and "SLR" are tools, not shooting styles. But if you want to take my Canon 20D and HUGE/SLOW 24-70 2.8L lens (or even worse-a telephoto)to do a rangefinders job, go for it. Just please know how ridiculous it looks/is.

I admit that I'm woefully ignorant, experience-wise, about rangefinders. That is why I make a question rather than a statement.
But I think you're overstating the disrelation there. It's not like we're comparing a lemon with a submarine. They are both cameras, and both about the same image format. Only they have slightly different viewfinder systems and focusing controls.

And I have many times used an SLR or a DSLR for what rangefinders are most famous for: street photography. For instance my Olympus OM2 or my Nikon D40 are both hardly larger or nosier than a Leica M8.

the big difference missed here is that with a rangefinder you see all the world in focus and select from it, with an SLR you see a thin sliver in focus, the lens wide open, then need to imagine that all in focus.
Not to mention an SLR blacks out the most important part of the photo, the moment you took the photo.

I don't intend a big argument here, I would probably love a Leica myself.

But just on general principles:

"the big difference missed here is that with a rangefinder you see all the world in focus and select from it, with an SLR you see a thin sliver in focus, the lens wide open, then need to imagine that all in focus."

Sure. On the other hand, at large openings, the SLR gives the more accurate picture.


"Not to mention an SLR blacks out the most important part of the photo, the moment you took the photo."

On modern machines this moment is so short I don't even notice it. That's just me.

"Sure. On the other hand, at large openings, the SLR gives the more accurate picture."

That's exactly where the difference lies: With the (D)SLR it's about the picture -- you see through the lens, what's in focus and what's in the frame (and nothing else!). With a rangefinder it's about the world and capturing a scene, a moment in time -- through the viewfinder you see what's happening "outside" and you never loose contact to the world around you.

All this, by the way, comes from someone who is currently using a DSLR with manual focus, prime lenses (Pentax K10D and 21/28mm most of the time). Will be back to Leica soon, hopefully...

I am very fixated on The Picture myself. Perhaps that's why I never used a rangefinder. (Plus I couldn't afford one back in the film days.)

C'mon get off the high horse. SLR and DSLR owners have a superiority complex? I dont think so, I think its the other way around. People that dont own a leica are trying to understand the mystique. What they end up getting as a respose is what we are now seeing here.

You will never understand.

Leica owners see the world not just a moment in it.

Wow, talk about a complex.

Its a camera Guys/gals thats all.

The back end of a horse would be proud. Ying or Yang, grain or noise, rangefinder or SLR? Please step back and see the whole.

Just a detail, but actually it's YIN and Yang.
A frequent mistake, as it seems.

No offense, Michael, but... I'm not sure many people would WANT to see the "whole" of the back end of a horse. ;o)
There's got to be prettier stuff to snap, whether with a rangefinder or SLR.