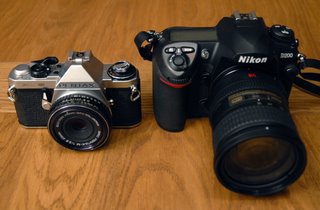 I used an ME Super back in the late seventies. I bought one used last week, for decoration. I was surprised at how much I still/again love this camera, its beauty, its functionality, its compactness, its simplicity, its style. If it was not because I really can't be bothered to have films developed and scanned, I could see myself using it, despite it being seriously outdated technically.
Posted by Eolake Stobblehouse at Sunday, April 23, 2006

I think lots of us feel the same. Somewhere on the road to photographic perfection the tools have become more appliances. Maybe there's hope on the horizon. the Ricoh GR-D and Epson RF are cool, if not quite optimized and the Panasonic DSLR might be promising. Hard to go back to film though!

You said it.
Far more people are and will be photographing with digital, so there must be space for specialist tools.

Canon has done a nice job keeping their entry level DSLR small. It is substantially smaller than your Nikon, but it also isn't as capable (except in low light). I'm disappointed that the Olympus 4/3s standard that was supposed to produce smaller digital cameras and lenses actually has a large body.

Me too!
Even the new 4/3 Panasonic rangefinder is huge.

I have two Pentax Spotmatics, two K1000s and an ME. They are all great cameras. I also have a Minolta Maxxum 7. It does some things the old ones won't but mostly I bought it because my studens were asking why things didn't work on their automatic cameras so I thought I'd better get one to help them. The photographer makes the picture, a camera only takes it. The marvelous shot of the flag raising on Iwo Jima in WWII was made with a Speed Graphic. Digital will eventually take over (and I'll soon be buying a Maxxum 5D) but there are still advantages to film. And there is nothing like making a black & white print in a darkroom.
Bill Wassmann

Well check here http://www.stevesforums.com/forums/view_topic.php?id=84684&forum_id=80 for pictures of my (admittedly chrome coloured) *istDL, (which by the way also has a penta mirror but is much better than the Nikon D50 or Canon Rebel viewfinders).
I have owned a number of classic Pentax models over the years (still have a KX and a newer MZ-7, also in chrome colour).
The DL is a joy to use, and image quality is definitely competitive, even with the 8MP models.
Do yourself a favour and find a Pentax DSLR, You would love it.
Ira