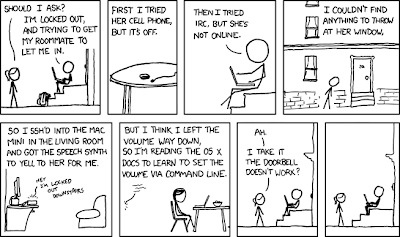 Been there; done that.

A *bell* on the *door*? Without the need for any network?
Wow. Wonders never cease.

When my Grandpa was a kid, in his remote rural village, his house had an even kewler invention perhaps: a "door-knock", it was called. Worked without thre need for ANY power source. It tapped directly into the user's muscular energy to issue a signal to the inhabitants of the house.

Must've been some advanced alien bionic technology. There was significant UFO activity in the area. One early afternoon, an alien object crashed right through the front window. Its shape was remarkably similar to a feather attached to a bolt by a string. It seemed to have cloaking abilities, because the son of the neighbors was playing right outside, and yet he swore he saw absolutely nothing zip by...

Great-great Grand-Papa also had a fuel-efficient, silent-engined, gasoline-independant, all-terrain transport vehicle that never suffered any punctures, and with bonus built-in sound alarm. It gave out practically no toxic exhaust fumes, but mostly, get this, ORGANIC FERTILIZER. Remarkably efficient in the garden, too. I seem to recall you turned it on with a special "don-key".

What ever happened to all this remarkable technology, I wonder?

My family had the super-charged door knocker, it was invisible and unfeelable. You simply rapped your knuckles anywhere on the door, and a knocking sound could be heard inside!

Where can I buy one? Are they still made?

Gotcha! I had one installed on your door while you slept! Go on, go out and try it!

Wow, it IS invisible! I only just noticed now.

And hey, IT WORKS! A-fucking-mazing.
Thanks for the ultra-rare collector's antique. You're the BEST, dudeski!