Does abandoned Idaho mine hold key to energy independence?, article and video.

I'm fully prepared to believe that governments chose Uranium exactly because it's not safe, in other words, you can build bombs from it too. 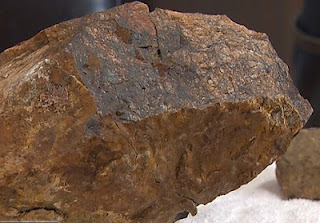 Update:
Well, as always seems to be the case, there's another view. Dave points to this article.

In this world it seems there are never any simple solutions to complex problems.
Posted by Eolake Stobblehouse at Saturday, November 10, 2012 3 comments:

T. Leuthard has a list of excuses if you're challenged while photographing on the street.

"I'm a photo student and our teacher wants us to shoot people. He is very tough…"
"I work on the 100 Strangers project (www.100strangers.com)…"
"I love your beautiful eyes…"
"You have an interesting face…"
"I love your style…"
"You are hot. Can I have your phone number…?"

Here's my first one:
"I am an undercover policeman. We suspect a nest of terrorists in this area, and one way of finding suspects is to see who will protest when we take their picture."

A semi-official notice about butts

I think this wonderful note shows a great sense of humor. 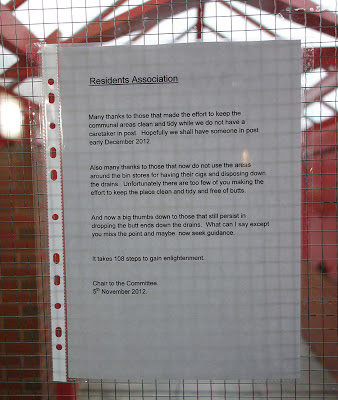 See this page, a link I got in the email. When you click a logo, you're asked to log in. For people who know a little about it, that smells very much like an email login phishing attempt.
But what made it a very clever spam virus is that when I mailed back to my friend that she had been hacked, I got a mail back saying:


"i am not hacked,i sent this to you myself.”
I actually believed she had written this herself. Very clever.
(I only clicked on the link at all because I got that answer.) 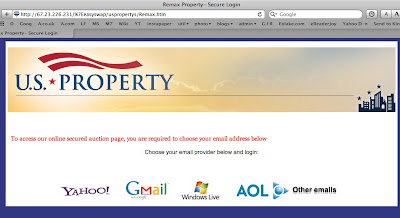 Posted by Eolake Stobblehouse at Wednesday, November 07, 2012 No comments:

Just re-found a great photo blog: Ming Thein.
Excellent pictures, and interesting articles about images and cameras, not the least, high-quality compacts.
I found via googling a lens. First thought: Bert would like this. And of course, checking up, Bert already told me about it long ago! Look at this likkle fokker. Must be the thinnest exchangeable lens ever. (The inner ring is not even part of it, it is just the camera's lens mount!)
It's only a hunnert bucks, and better than you'd think such a small and cheap lens could be. (One of Ming's commenters says it's better than his old Nikon 24mm lens, from which he has sold many images.)
Posted by Eolake Stobblehouse at Tuesday, November 06, 2012 No comments:

Please, stop following your dreams!, article.
Jiminy Cricket (“When you wish upon a star…”) would not be happy with me, but the truth is, I’m getting tired of people wasting their lives following dreams they’ll never achieve.  I have screenplays on my desk from writers who “have a dream” about writing a Hollywood screenplay, but aren’t interested in actually attending a writing class.  I met an actor recently who left his wife and young son to pursue his dream of an acting career.  The problem is, he has absolutely no talent.
-
Posted by Eolake Stobblehouse at Tuesday, November 06, 2012 5 comments:

For the purists who are going to point out the real name is the Panasonic 35-100mm f/2.8 XOIS, I think we’ve reached the point where we can assume any product remotely connected with photography has an X in its name somewhere. Maybe if we all quit mentioning that letter, they’ll stop using it. Twenty years from now, young photographers will make fun of us old-timers by saying things like “you’re still shooting with X equipment, aren’t you?” A century from now they’ll describe the timeline of photography as the wet plate era, the film era, the digital era, and the X era.

LOL. No kidding, it's totally ridic how every new camera this year, especially the ones which are actually interesting, has an X in the name. And who can remember the difference between Canon's X-Pro 1 and Fuji's Pro-X1, or GXpro, or XG-1, or what the heck it was.     :-)

Thank god at least one of the very most interesting cameras was not infected with the X-Men syndrome: Olympus OM-D E-M5. They just settled for giving it two bland names instead. D for digital, E for electronic. Woa, mind-blowing. Great camera though.

I remember many years ago Canon had an experimental camera, named "Canon Frog". Well, there's a memorable name, that wasn't so hard was it?
Posted by Eolake Stobblehouse at Sunday, November 04, 2012 7 comments:

[Thanks to Shawn King]


Update: Alex G has an interesting article about the problems with the Three Laws in the case of sexbots, if they became sentient.
I can only agree, yes, a whole box of worms.
But I'd say, no reason to limit it to sexbots. If a robot became sentient, a progressive culture (like The Culture of Iain M. Banks) would surely have to grant them citizenship, and the three laws scrapped, otherwise robots would simply be slaves, no more moral than having human slaves.

This would put a lot of weight on the decision of how exactly we measure sentience! A man who just spent a year's salary on a man-servant robot would be quite dissatisfied if the robot preferred to play Angry Birds rather than do the laundry. But if it's deemed to be sentient and be its own person, then there would be nothing he could do, legally.
Maybe pay it? Then we'd see if a sentient robot would have any need for money. It may if it need power and like to not lie in the rain all year. Then it may need to pay for food and shelter...
And what do we have then? Basically just more humans, only probably a lot stronger, faster, smarter...
And we'd better pray that they are also kinder! Otherwise, guess who are the new slaves.
Posted by Eolake Stobblehouse at Sunday, November 04, 2012 13 comments: