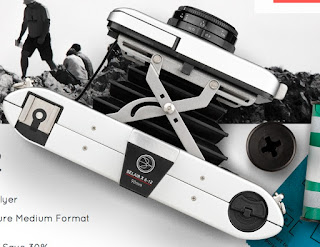 2: I think they exaggerate when they claim:
an entirely new 6x12 film camera that will bring an amazing level of lens quality to Lomographers. This stylish jet-setting camera combines all the stunning features of a panoramic medium format camera without the excessive size. Offering never-before-seen sharpness...

If you look at the numerous samples low on the page, I think you'll see pictures which, even at web-page sizes, are noticably inferior to even a decent digital compact camera's output. In fact some of them made me think we were looking at the latest "toy camera", a cheap plastic camera which gets its charm from softness, vignetting, light leaks, low dynamic range, etc.

To me, these look like the kind of photos we took with a cheap camera in the sixties.
Indeed there's a hint that this may all be on purpose if we notice the mention of "Lomography" on their page. Which is apparently similar to Toy Photography. That is quite subtle though, when the rest of the page claims "Quality!"
Posted by Eolake Stobblehouse at Friday, October 19, 2012 4 comments:

Is there a marine biologist in the house?
A friend on the US west coast photographed this on the beach. What the 'eck is it?
Two parts of it had a "tongue" coming out of a "beak". And the biggest beak even moved itself a substantial amount.
(More/bigger pictures.) 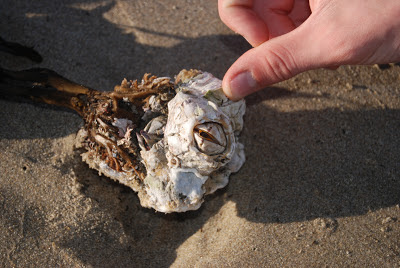 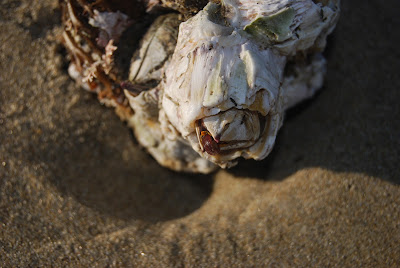 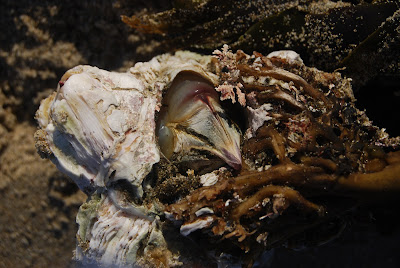 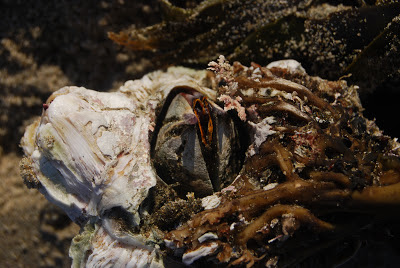 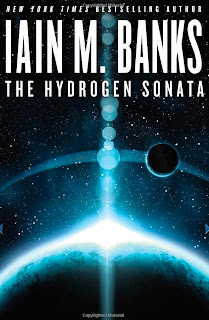 It would be hard to say which Culture books are the very best (Player of Games and Use of Weapons are up there for me, and Surface Detail), but The Hydrogen Sonata certainly is in the *type* I like the most: entertaining, lots of fancy far-future super-tech stuff, Sentient, powerful Culture megaships and drones, and so on. Riveting stuff.

Iain Banks has said that the Culture is the *best* society he could imagine, while still being believably human. And that this was what is driving the whole concept and the books. And that he'd love to live there. Me too! Technological wonders everywhere, and all the basic human problems solved. (If one finds this boring, one could just take a ship to a nearby less civilized empire, where one could risk being shot down in the street, if that makes life more precious to one.)

Even just one aspect seen alone makes Banks special to me: his subtle, underlying sense of humor. I think few people would call his books comedies, but the humor is everywhere: in the names the spaceships give themselves ("Of Course I Still Love You", Anything Legal Considered", Just the Washing Instructions Chip In Life's Rich Tapestry"...), in the shapes he gives aliens, in the personalities he gives everybody, not the least the AIs, etc etc. Humor makes life worth living.

Update:
I have to admit this was not always so easy to read, because of all the invented names and invented technology and politics. I had to use an ebook as support when I didn't get what the audiobook was saying. (I'm not sure if it's more so in this book than his others.)

... I've just been going through which of his books I can't yet get as audiobooks, but can get as Kindle books. Man there are many good ones I want to read again! This guy is a tour de force.
Posted by Eolake Stobblehouse at Wednesday, October 17, 2012 30 comments:

That's an F:2.8, folks, that's ridic.
Very cool of Sigma to make such a thing.
Article. 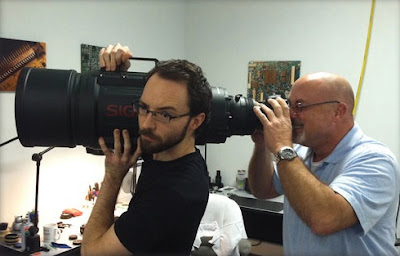 I see that more and more new and big-ticket movies are now being sold on blu-ray, region-free. Yipee. This is really great. I had not expected that to happen anytime soon.
Now we just need many more publishers embracing DRM-free publication, and the Kindle becoming able to read ePub. It's embarrassing that they haven't enabled that yet. You'd think that amongst the million titles they give away for free, letting the device being able to read the "standard" ebook format wouldn't be a big deal.
Posted by Eolake Stobblehouse at Tuesday, October 16, 2012 2 comments:


A doctor and a lawyer were talking at a party.

Their conversation was constantly interrupted  by people describing their ailments and asking  the doctor for free medical advice.

After an hour of this, the exasperated doctor asked the lawyer, "What do you do to stop people from asking you for legal advice when you're out of the office?"

"I give it to them," replied the lawyer, "and then I send them a bill."

The doctor was shocked, but agreed to give it a try.

The next day, still feeling slightly guilty, the doctor prepared the bills.

When he went to place them in his mailbox, he found a bill from the lawyer.

[Thanks to Evan]
Waterfall swing. How did things work before computerization?

Water recirculates through 273 independently controlled solenoid valves at the top of the structure to create a wall of water. This water starts from a collection pool on the ground and is pumped up to a large pipe that feeds the solenoids. Sensors mounted on the swingset gather information about the angle and speed of each swing. That information is sent to a computer that predicts the action of the rider. The computer then creates a hole in the wall of water, allowing the rider to swing through without getting wet.
-
Posted by Eolake Stobblehouse at Sunday, October 14, 2012 10 comments: