"Everything everybody just said is either obvious or wrong!"
- Grandpa Simpson, The Simpsons

I had the task of photographing this coin pendant (it's a Sovereign, smaller than it looks, only 22mm/0.86"), and this shows two things: 1) direct flash light is often terrible, and in this case it's beyond terrible, it doesn't even look like the same object! Somehow the daylight color of the flash (actually LEDs) removed almost all golden coloring from the pendant, and it emphasised all the minute scratches it has so it looks awful.
But: 2) you used to need a fancy camera to do stuff like this, but in this case my pocket-camera Canon S100 did a fantastic job, and I bet any other good pocket camera would also. (The thing is that with the small sensors, the change of the lens to get to macro setting is very small, where in a big camera it's a big deal.) I didn't even need a tripod, I just put it on the table by an ordinary table lamp, and hand-held the camera! It's amazing. 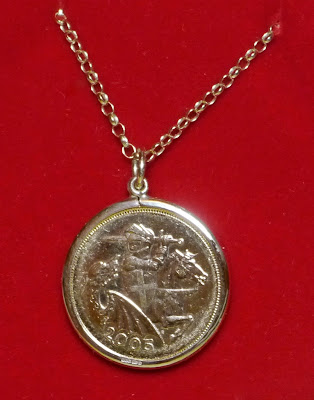 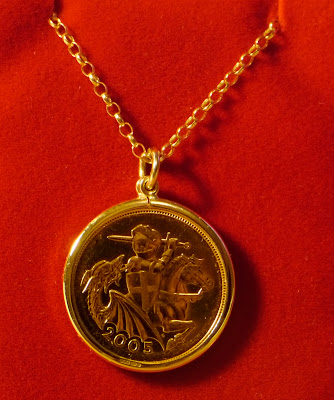 Photo from The Sartorialist blog. (Sartorial: about clothes.)

If most street photographers looked like this, apart from boosting the fun levels, I think there would be less paranoia that all people with a camera are either predators or terrorists. 180 Million? Per day? Nah, I doubt anybody could find any good use for that anyway.
Posted by Eolake Stobblehouse at Friday, April 27, 2012 1 comment:

I forget to check my RSS reader and the many web sites I'm interested in. But I found out there are services which will send feeds to your email, like Feed My Inbox, and for the few which are essential, I've found this is really practical. Once a day per site I get the new articles, and I click on those I find interesting, and send them to Instapaper if they're longish, for reading at leisure on tablet.
I'm sure there are more services like it, but FMIb is free for the first five sites, and I think that's a reasonable number to have as "essential" anyway.
Posted by Eolake Stobblehouse at Friday, April 27, 2012 No comments:

Here's an example of the size savings of the Micro Four Thirds camera system. The Pentax K-x is a great camera, and one of the most compact DSLRs there are. Admirably compact in fact. But by all reports the new Olympus OM-D has all the quality in various ways of the Pentax, and may have quite better stabilization and low-light capability (the sensor is said to be a big step up for the system).  But if you fit it with a flat lens like Panasonic's 20mm or 14mm, it's still smaller than the K-x without a lens! and will fit in a large pocket. And while some of Olympus' excellent new prime (non-zoom) lenses are a little deeper, they are still exceedingly compact and light compared to traditional lenses, so you're really getting a system which bogs you down dramatically less.

Many professionals have started to use the M4/3 system, and that's even before the rather more capable and solid OM-D model hit the market. I think the system has a very interesting future for enthusiasts. Scratch that, already the present is very interesting, the future possibilities blows my likkle fragile maaahnd.

Below is a comparison which may actually come closer in terms of quality and capabilities, the Canon 60D and the OM-D. Look at that size difference! And the D60 is not a large camera for a mid-level DSLR.

... And if you go with the lens-compatible Olympus Pen Lite (about the same image quality, but less features and ruggedness), well...

Of course most of these gains are of course due to technological progress, which other makes may be able to replicate. But oddly and sadly none of the big makers (Canon, Nikon, Pentax) have so far shown much interest in the compact interchangeable-lens market, apart from a couple of efforts (Pentax Q and Nikon 1) which have sensors so small that serious photographers have trouble taking them, well, seriously. And for any of the big boys to join the M4/3 system is probably well too strongly against the corporate male-ego principles! It would be like Mercedes and BMW making compatible spare parts, oh the disgrace! 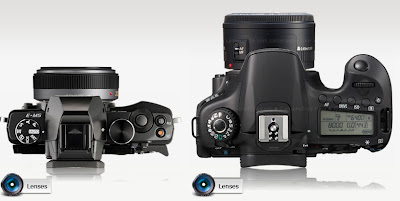 I like that the OM-D is only 400 grams, body-only. Not feather-weight, but still about half the weight of a middle-class DSLR.
Posted by Eolake Stobblehouse at Friday, April 27, 2012 2 comments:

Here's an interesting tidbit: it has been found that how much a doctor gets sued for malpractice has *no* relation to how many mistakes he makes! And it has *everything* to do with his personal attitude towards his patients, how interested he seems, how much he takes care to inform the patient about what's going on, if he takes a couple extra minutes to get the extra understanding, and such.
Posted by Eolake Stobblehouse at Friday, April 27, 2012 9 comments:

It is remarkable to me how hard this is to learn. I'm still working on it. I acknowledge that most of the photos I admire the most can be beaten technically be my most humble camera, and yet I continue to have a craving for the newest "best".
I guess I can just try to at least separate my ideas about artistic quality and technical quality.

There's a parallel in fine art. Take the ten most successful painters in history. Hardly any of them could draw very well. And of those who could (Picasso for example), few of them used that skill in the art which made them successful.
Posted by Eolake Stobblehouse at Thursday, April 26, 2012 9 comments:

"What!? I pay you first class cross-ocean, buy you a lobster meal and a dress in Paris, and now you just say goodnight and lock your hotel room from the inside!??"
Posted by Eolake Stobblehouse at Thursday, April 26, 2012 3 comments:

When medium format cameras got into the 30 megapixel range, I thought the end was nigh. But it's beginning to look like there's an endless appetite for more pixels, pretty amazing. The new Mamiya/Leaf has 80M of them! (And you gotta want them, it is $40 grand, and that's the back only, not the camera or lens.)
It also has an interesting interface feature: a touch screen where the touch parts continue outside the screen part. I've seen that idea talked about a few places, let's see if it catches on. It's a very handsome camera, I like the looks better than the current Hasselblads, for instance. (Unlike the old film Hasselblads, which were and are classic designs.)
Posted by Eolake Stobblehouse at Wednesday, April 25, 2012 No comments:

The fashion industry and Daria

Instructions to young runway models:
"Your worst enemy is at the end of the runway, the one who stole your boyfriend. She has broken her leg. Your job is to tell her without words that you are there to watch them cut it off."
- from Daria, one of the best animated satires ever. 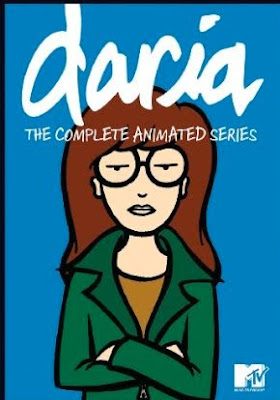 A rare 5-kilo Nikon lens is for sale in London. It's a fisheye, but covers even more than the 180 degrees of a normal fisheye!
For those of us with a bit of a "big glass" fetish, it rarely gets bigger!

This is not something you'd like to drop on the stone stair steps!
Posted by Eolake Stobblehouse at Monday, April 23, 2012 3 comments:

Just watched the first episode of 2 Broke Girls. I liked it, I hope this one sticks. It's funny, and both the girls are hot, and funny, and spunky.

Posted by Eolake Stobblehouse at Sunday, April 22, 2012 No comments: