[Thanks to Ian.]
Goliath tigerfish from the Congo River. 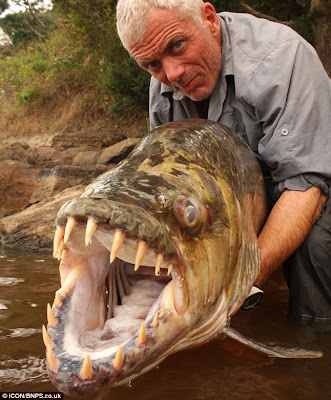 "The goliath tigerfish is one of the most fearsome freshwater fish in the world and said to be a much bigger and deadlier version of the piranha.
The giant fish has 32 teeth that are of similar size to those of a great white shark and has been known to attack humans and even crocodiles.
It has only ever been caught by a handful of fishermen due to the danger it poses and the fact its habitat is notoriously hard to reach."
Posted by Eolake Stobblehouse at Saturday, November 27, 2010 3 comments: 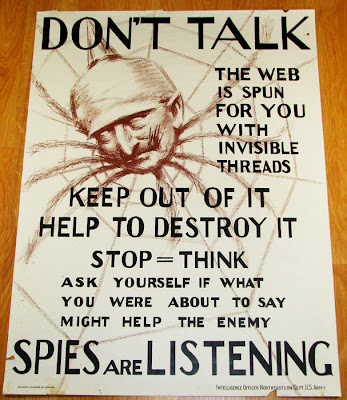 Quotes of the leak

A hobby a day keeps the doldrums away.
-- Phyllis Mcginley

Use, do not abuse; neither abstinence nor excess ever renders man happy.
-- Voltaire

There is only one way to defeat the enemy, and that is to write as well as one can. The best argument is an undeniably good book.
-- Saul Bellow

Laughter gives us distance. It allows us to step back from an event, deal with it and then move on.
-- Bob Newhart
Posted by Eolake Stobblehouse at Saturday, November 27, 2010 No comments:

Maybe a day late, but if we say that holidays travel with the sun, not against it, today is when Thanksgiving arrived in Europe...      :-)

Thankfulness was not often my strong side. Only occasionally, for example when I was a kid I was afraid of getting my head under the water, and a slightly older pal coaxed me into learning it, and it turned out that swimming and frolicking underwater became one of my great joys. And I was so thankful to this guy that I told him I loved him until he got embarrassed.
But I'm learning, and I got much to be thankful for, and I'm also learning that it works in reverse too: being thankful provides more to be thankful for, so splurge on it. General thankfulness as a basis of one's outlook on life is a powerful foundation.

Oh, another thing I've learned is that this kind of thing, changing attitudes and thinking, are far from as easy as one would think, but one should not give up, because they change over time, not in quantum leaps.
Posted by Eolake Stobblehouse at Friday, November 26, 2010 5 comments:

I found my rubber grip material

I want to thank all the kind readers who helped with ideas for how to rubberize an ereader (or other things) for a better grip. After many trials of many products, it seems I finally found a really good one.
(Hmm, I wonder if you can fuse two rubber edges together with heat?)
Posted by Eolake Stobblehouse at Friday, November 26, 2010 9 comments:

I'm surprised they didn't ask/answer the obvious one: "even diamond?"
So I googled around, and it seems the melting/burning point of diamond at surface pressure is 3820 Kelvin, or 3548 Celcius, so he might be right.

That's a cool lens! I want one for my Canon 5D2.
Dangerous though. It's hard to believe, emotionally, that this point in space will burn off your finger if you put it there.

It seems it's a mirror-lens. I can't really tell from where the sunlight comes into it.
Posted by Eolake Stobblehouse at Friday, November 26, 2010 1 comment:

Juno, not the movie

Juno, the movie, was very good. But Juno the email provider? Doubtful. A friend tried them out, but it seems that they actually down-scale images he gets mailed down to only 548x368 pixels. This is a grievous breech of trust, seems to me. And I never heard of the like before. But then, I'm sure most people would never find out.
Posted by Eolake Stobblehouse at Friday, November 26, 2010 No comments:

How Your Playboy Centerfold Sausage Is Made

How Your Playboy Centerfold Sausage Is Made, article, photo essay.

"The nipples of Angel Lynn Boris, July Playmate of the Month in 1996, were also unacceptably pert, with a circle around her nipple appearing to lead to 'soften.'"
"Unacceptably pert"? That's a contradiction in terms. There's nothing so sexy as pert nipples.


"...even after a genetic bounty, all-but-certain plastic surgery and dieting, good lighting, a pro-photographer, and dozens of shots, even the fantasy woman is not fantastic enough. Ironically, it's that mentality, and its cookie-cutter sexual sensibility, that's helped make Playboy irrelevant in the years since."
'Nuff said. They simply kill all variety, and with it all life in the photos.
Posted by Eolake Stobblehouse at Thursday, November 25, 2010 6 comments:

A small prayer to Canon

Many photographers like me are very thankful for the amazing performance of the Canon full-frame camera 5D, and the 5D2. Compared to most full-framers, it's compact-ish and not too expensive, and the quality and low-light performance is just wonderful. Well better than any reduced-frame camera (which is pretty much any affordable DSLR).

We are approaching the time when we might expect a replacement soon.
My prayer is:

Dear Canon, please don't play the megapixel game anymore. 22 megapixels are plenty for a 35mm-sized camera, really. Instead, use your resources for even better low-light performance in the Canon 5D Mark III. If you can beat the Nikon D3s in this respect, you'll be king of the hill. Thanks for listening. I might be a bit ahead of times. The 5D2 is two years old now. The Mark 1 lasted three years. But that's a long time in the digital market.
Posted by Eolake Stobblehouse at Thursday, November 25, 2010 8 comments:

(Updated) Kim Basinger - My Stepmother is an Alien

This beats the heck out of 9.5 Weeks.

The film My Stepmother is an Alien is pretty funny, and has Alyson Hannigan (Willow in Buffy) in a young role. It's a tad silly at times, but very watchable if you like broad comedy.

Ah, this is totally hil. This is the blushing bride, Kim: 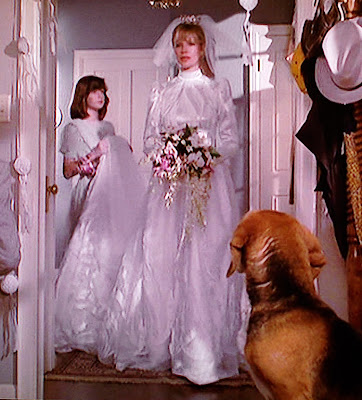 And this is her from the back: 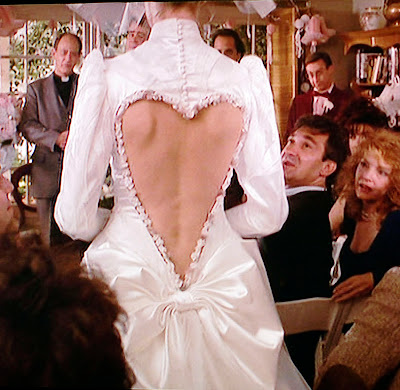 Ya gotta love it.
Posted by Eolake Stobblehouse at Thursday, November 25, 2010 No comments:

Wallace & Gromit's World of Invention, BBC show.
If you scroll down a bit, you can see a full show, currently one about the senses and inventions relating to them. Not bad.

Update:
Dang, seems this can't be viewed in the states? Revenge for all the Hulu teasing?
Posted by Eolake Stobblehouse at Wednesday, November 24, 2010 4 comments:

This vid is a few months old, but I post it for a couple of reasons: 1: a cool little segment about progress in robitics and AI, and 2: I am hopelessly in love with Cali Lewis, and she just looks fantastic wearing glasses. (This is the only time so far I've seen her use them, she should do so more often methinks.)

Like you may be aware, don't give any account information to anybody if they ask for it over an email. Don't follow any money-related links in emails.
Go to the relevant web site direct, and see if they have any messages for you.

I just got this in the mail:
"PayPal Is Sending You This E-Mail To Inform Your That Our Processors Are Unable To Verify Your Account Profile.This Could Be Due To Many Reasons, For Example..."

There was a link to click to give the "updated information". I took the domain part from that link and got this site:

The story of Jonah

One of the good stories from the Book, told by a girl with fifty times the speaking talent than many adults I've seen.

Posted by Eolake Stobblehouse at Tuesday, November 23, 2010 No comments:

About the only thing that comes to us without effort is old age.
-- Gloria Pitzer

---
That's funny. And further, not even old age is effortless, because you have to survive to attain it! This is no mean feat. So many of the people I knew when I was younger are dead now, many of them well before they reached old age.
Posted by Eolake Stobblehouse at Tuesday, November 23, 2010 7 comments: 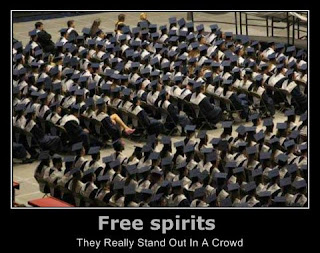 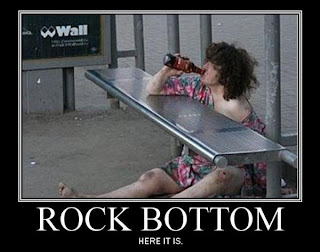 That one is great. It says it all.
I have a bizarre affinity for people who hit bottom. (And I don't mean in the way I occasionally do on weekends with my many-tailed whip.)
Posted by Eolake Stobblehouse at Tuesday, November 23, 2010 3 comments:

This guy is just great.


via Peg and Bob.

(Can anybody figure out an easy way to embed a video which is on Wimp?)
Posted by Eolake Stobblehouse at Tuesday, November 23, 2010 4 comments:

Pros and cons of fridge decoration

A woman in college was visiting her folks for the holiday.

"Will you set the table, dear?" the mother asked her late one afternoon.

"Sure thing, Mom," the girl replied. She retrieved the tablecloth, dishware and silverware and set the table. She then opened the refrigerator.

Taped to the inside of the fridge door was a photo of a lovely, slender, perfectly built, and scantily-clad young woman.

"Mom, what's this?" the girl asked, pointing to the picture.

"Oh, I put that up there to remind me not to overeat," the mother answered.

"Is it working?" the girl asked.

The Wild One is in town 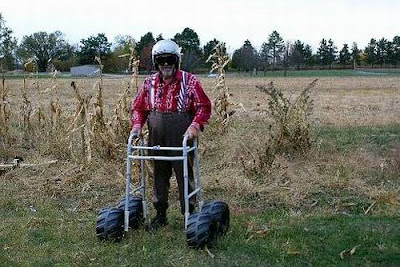 Occasionally I get my fifteen minutes of fame, but it's often for the strangest reasons. It happened again.
It's odd, but Mike's normally very astute and friendly audience just don't seem to really click with the jokes that I and Mike find hilarious. Last time it was the men/women/gadgets/shoes joke, which grated some people   fiercely. This time it seems that a yellow sweater and a pink camera is a red flag (!) to many people. Never would'a thunk it.

------
The great picture below is only related in that I got it via Mike Johnston from the site linked above. 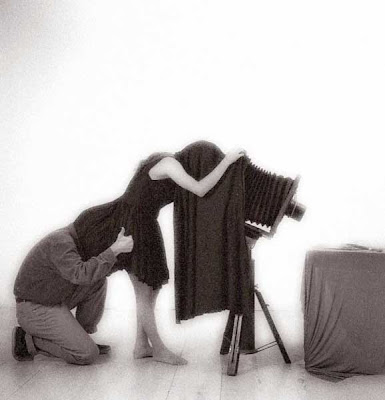 Caption: "An early photo of me, trying to figure out how to use a large format camera...."  --Emil Schildt
Posted by Eolake Stobblehouse at Sunday, November 21, 2010 4 comments: