Article.
He has a tiny manual darkroom inside the camera! So cool.

Posted by Eolake Stobblehouse at Saturday, May 12, 2012 6 comments: Links to this post

It's clear that designing a user-friendly user interface is one of the really big challenges in technology. It's rarely done really well, and often disastrously bad.

I really like the Olympus Pen, but Olympus's menus... oh my gawd. (Maybe not "disastrous", but bad enough.)

I had only use the Pen Lite with auto ISO which I really like. But a couple days ago I wanted to change it to a specific ISO Setting. And despite my 13 years of experience with a similar number of camera, for the life of me I couldn't figure out how to do it!
I mean, setting the sensitivity, how much more basic does it get? Many cameras have a dedicated button for it.

It got worse, I had to hunt in the manual to find out how to do it. But I finally found it:
First I had to press the OK button to activate the "Live Control" screen. Hardly intuitive, the OK button is used to confirm settings, not starting them.
And then ISO didn't, contrary to my expectations, appear immediate and clearly on the Live Control screen. I had to scroll down beyond the first "page" to find it. Closer to the top was things like "focal length" (which I am not even sure what's used for, since most lenses tell this to the camera, it may be for the rarer instances that this does not happen) and Image Aspect Ratio, which I believe most users rarely change.
Sigh.

You would think that after well over a decade, camera settings had not only become pretty intuitive, but also found a set of standards, that they would be similar on most cameras. But far from it, they are all different, and most are pretty confusing.

Another example: the Olympus cameras have a "Super Control Panel", which handily displays basically all the important settings of the camera on one screen. But guess what, this is by default turned off! And to turn it on, you have to go deep in the menus and know exactly what you're looking for, you will never stumble over it on your own. (It's even called SCP in the menus, who would guess that that stands for.) I only heard about it due to an article which reader Bert helpfully referred me to.

Sometimes you almost miss the good old Pentax K1000, durable (though actually not that heavy), cheap, and ultra simple, it had the aperture and the shutter speed to set, and that was about it.  It didn't even have a friggin self timer! The camera was made and sold for over twenty years I believe, particularly schools loved it, it was cheap, durable, and it taught the basics without fancy distractions.

It also didn't have an on-off switch! You had to put on a lens cover to save battery. But it was fully operable without battery (of course without light metering though), a rarity. It sold over 3 million units between 1976 and 1997.

I never used it myself, I used a Konica TC and later a Pentax ME Super. I never used a manual camera, though it probably would have been good for me. Fortunately I liked to read about cameras (I tore through the dozen books about it the library had), so I picked up what aperture and shutter speed do.
Posted by Eolake Stobblehouse at Friday, May 11, 2012 15 comments: Links to this post

It's funny how people love doomsdays. They come and go every few years. I guess daily life as a human simply doesn't have enough things to be afraid of!

[Clip is from Harvey Birdman]
Posted by Eolake Stobblehouse at Friday, May 11, 2012 2 comments: Links to this post

Time's cover shows a mother breastfeeding her toddler.
Jamie Lynne Grumet, photographed by Martin Schoeller with her 3-year-old son, is a mother from Los Angeles who subscribes to attachment parenting...

That kid is only three?? He is two thirds her size! It seems that prolonged breastfeeding may turn us all into giants in a few generations!

Update:
Here's tOP's comment on it.
Posted by Eolake Stobblehouse at Friday, May 11, 2012 27 comments: Links to this post

Check out the rack on that one

Posted by Eolake Stobblehouse at Thursday, May 10, 2012 3 comments: Links to this post

Posted by Eolake Stobblehouse at Thursday, May 10, 2012 No comments: Links to this post

The History of Coffee, infographic.
Posted by Eolake Stobblehouse at Wednesday, May 09, 2012 2 comments: Links to this post

Price gouging in the old world 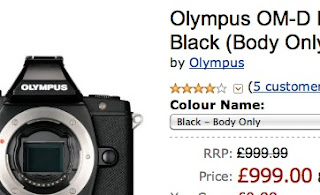 [Thanks to Joe]
Google gets first self-driven car license in Nevada, article.
"The vast majority of vehicle accidents are due to human error. Through the use of computers, sensors and other systems, an autonomous vehicle is capable of analyzing the driving environment more quickly and operating the vehicle more safely," California state Senator Alex Padilla said in March when he introduced that state's autonomous car legislation.

I wouldn't have thought that would happen this soon, that's kewl.
Posted by Eolake Stobblehouse at Tuesday, May 08, 2012 No comments: Links to this post

It had to happen: Polaroid is born again in digital form. You can save and edit the 14MP photos, but you can also get them printed instantly or later by the camera, which has a printer making 3x4" prints.

They ought to make a setting in the camera so the pictures comes out looking like the classic SX-70 pictures with the oddly charming washed-out feeling and greenish whites. It was a fun medium to work in.
Posted by Eolake Stobblehouse at Monday, May 07, 2012 5 comments: Links to this post

You must not come lightly to the blank page.
-- Stephen King, On Writing

Oooh, I think this is bad advice, at least taken as is, out of context. The more seriously one takes writing, the more likely it is one will arrive at that cramp of emotions which results in writer's block.
Posted by Eolake Stobblehouse at Monday, May 07, 2012 1 comment: Links to this post