Journey by a London Bus

Thanks to Jerry for the tip about this educational/propaganda film. It turns out that USA is not alone in having produced rather charming and funny films like that in the post-war era.
Posted by Eolake Stobblehouse at Saturday, February 18, 2006 No comments:

David Pogue has as usual made a very good and entertaining column, this one from his NYT email newsletter, about hard drives and the companies which reanimate them when they die.

From this article:
SG: Yeah. One of our recovery guys said something one time, that in 100 years, anything we put on electronic media will not exist. Yet anything published will still be around. And I think he's right.
DP: So things on paper--
SG: So your books will be here.
DP: Thank you so much.

... It is a very valid point, of course. We should never stop thinking about survival of important data and culture.
On the other hand, these days with everybody being his own publisher, the great bulk of stuff being published only in electronic form is meant to be transient. What is the immortal value of 500,000 blogs on, frig, god knows what, but almost all of it about things that are only relevant this year or this month. Heck, even David Pogue's books, which are the best tech books you'll find... who's gonna read about Mac OS X, version 10.4.4, in the year 2106?

ALSO, I actually don't agree that the data will disappear. Because people don't let their data sit on the same disk until nobody knows how to read its format anymore. They move it to never disks, and most of the important stuff will probably be readable somehow, or get translated along the way. Just think about how much of what was published on paper 100 years ago which has actually survived (on the original paper). It is surely much less than 0.1%.

ALSO, if something is important in a hundred years, it will be far easier and cheaper to bring it to the world, on the Net. If something is only available on paper in a few copies, it is not really available to mankind anyway.
Posted by Eolake Stobblehouse at Thursday, February 16, 2006 4 comments:

Can somebody explain to me why everybody hates Britney Spears' guts? Admittedly I don't follow the pop scene, so I may have missed something, but as far as I can see, she is not guilty of anything that the nearest 5,000 pop singers aren't.
And her music rocks more than most pop music (Shania Twain, Kylie Minogue, whatnot.) Her voice is special, and there are a lot of really good melodies in there.
So what's with the hate club?
(Examples of the hate club: Alice Cooper does an act where he kills Britney in effigy. And if you go to iTunes, you will find more hateful reviews than positive ones. Weird.)
Posted by Eolake Stobblehouse at Thursday, February 16, 2006 7 comments:

I use email for everything. I'd email my dead grandmother, except she uses AOL.

Sometimes I am contacted by people who insist on calling me on the phone. I've gotten less and less inclined to agree to this, and I just realized why: Of the half-dozen people who have done this and called me in the past couple of years (for very different reasons), almost all of them had these things in common:
1: They wanted me to agree to something.
2: I got nearly nothing out of the call.
3: And worst, they all talked for at least half an hour!
I can answer an email in two minutes. When somebody talks to me on the phone for the better part of an hour, I can't do anything else in that time. In other words, it wastes my time. Oh, I enjoy chatting with friends, and even certain very limited business things are best handled over the phone. But still, see above.
Do you have this experience too?
Posted by Eolake Stobblehouse at Thursday, February 16, 2006 11 comments:

Like I said, recently I have been trying to expand my horizon with classic films from the hippie period, since so many people have such huge respect for them. And I do admit they deserve respect, because they went up against a very very powerful tradition of certain kinds of films under the old studio system. And some of them I liked.
But still...
Midnight Cowboy I at least made it through, even though it was puzzling to me why anybody would want to make a film about nobodies living in squalor, being nowhere and going nowhere. And as usual one of the heroes died in the end.
Mean Streets and Raging Bull I did not make it through by a long shot. Why? Because all the characters were small-minded people, bitching and quarreling all the time about nothing in particular. I really don't see why that would interest me.
Am I the only one who feels this way?
Posted by Eolake Stobblehouse at Monday, February 13, 2006 11 comments: 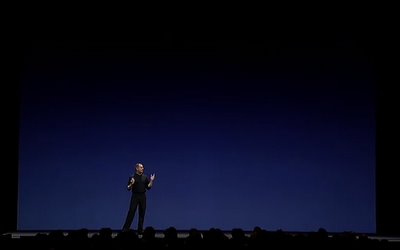 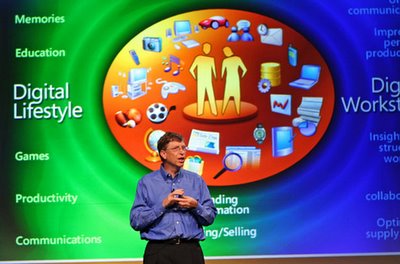 What better illustrates the different minds of Apple and Microsoft? (From this article.)
There is an anecdote that after Steve Jobs once publicly said that Bill Gates and Microsoft has no taste, he called Bill and apologized. He said that he should not have said so on the record, even though it's true! And what Bill said is that even though he himself may have no taste, it is unfair to say that Microsoft therefore does not. Funny.
Posted by Eolake Stobblehouse at Sunday, February 12, 2006 12 comments: