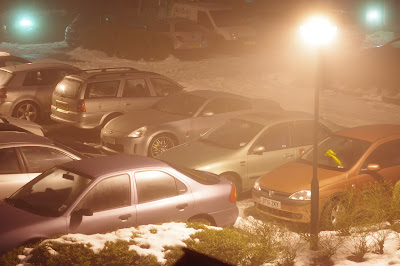 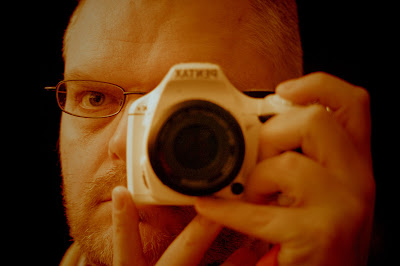 ------------
I'm finding more and more that I enjoy just playing with photography, rather than always be dead-serious about it. It's just dang fun.

Isn't that my golden Vauxhall Corsa on the right side in front???
Didn't know I was in your area, haha!
Ah: many bright-coloured cars around. In Germany this yard would be filled with black cars, it's like people having a blackgasm.

There are countries where the cars are even more boring than here? Gud gawd.

They look brighter than they are, because I used auto-bracketing (can't turn the thing off), and chose the higher exposure.

I've decided to embrace the auto-bracketing: It's fun to hear the good speed of the K-x squeezing off three frames in 0.7 second, and I like to have alternative frames when shutter speeds are dicey, and it turns out that alternative exposures, to my surprise, can often enhance the expressiveness of a photo.

You know, glasses kind of work for you, but have you considered getting laser surgery? I had it done last May and it's great. Partly depends on how strong your prescription is, mine was quote strong.

Isn't that my golden Vauxhall Corsa on the right side in front???

When you're being interviewed on Top Gear, don't tell them you own one of those! ;-)

I've been considering surgery too, but:
- No surgery is 100% risk-free, only "very safe". There's always that odd chance. Why take it if you can live just fine like that?
- Eyeglasses not only don't bother me, but it's actually rather convenient to always have a protection in front of your eyes. The days of GLASS specs are long-gone. Nowadays, the lenses getting in the way of an accidental blow might save you an eye. When I was a teenager, I once received a falling stone on the border of my glasses, and it bounced back. Without them, it could likely have hit me smack in the eye.

Also, I'm not exactly blind as a bat without my glasses, so improving my vision to be independant from them in case of some tough luck isn't vital. I could still find my way out of a collapsed building in Haiti after losing them in the rubble, for example.

Haha Dave, I hear you. In Germany a saying goes, "jeder Popel fährt 'nen Opel". Explanation: Popel means the things you have in your nostrils (yeah, yuckish, absolutely) and in this case refers to ordinary people (like ...and me, haha). Opel is the German manufacturer of the Vauxhalls.
So the meaning is, that it's a car for the lower class. Add to this the effect of the rhyming, and the pun is complete.
Anyhoo: my 4year-old Corsa with still its original battery had been parked in a semi car-port during 3 weeks under the present nasty wintery conditions with temperatures always around -5Cel. I was afraid I wouldn't be able to get the 3cyl engine started after this long period of time. So I prayed to the universe (whoever might sit there and listen), turned the ignition key - and viola (thanks, Eo), it came to life after 2 or 3 revolutions. Wow!
I love this car, I can tell ya.

No surgery is 100% risk-free, only "very safe". There's always that odd chance. Why take it if you can live just fine like that?

While that's true, less than 1% of people have complications. And I really was blind as a bat without my glasses. As for them no longer being made out of glass, that's something at least as in the days before plastic lenses I would have had what they call "coke bottle" glasses. Add to that peripheral vision with glasses is rather dismal.

Of course even if you wanted to have it done you might not necessarily be able to. I almost didn't qualify as my corneas were almost too flat already. The way it's done, as you probably know, is that they flatten the corneas with the laser...if they're too flat already, well you get it. So I was lucky.

And I hated contacts too. Although I never tried the disposable ones, they are supposed ot be a lot better.

If EOlake or anyone else in England were thinking of getting it done they might want to come to the U.S. If it's like seemingly everything else in the UK the surgery is probably twice the price it is in the U.S.

"So I prayed to the universe (whoever might sit there and listen)"
Wise reasoning. If anybody's "out there" to hear you, better pray to the whole Universe to reach "It". Why limit yourself to just the supposed dwellers of our atmosphere's clouds? ;-)

Classic bumper sticker: "My other car is ALSO a heap of scrap!"

"it came to life after 2 or 3 revolutions"
Many "rising" countries wish they were this successful!

"While that's true, less than 1% of people have [surgery] complications."
Correct. The intrinsic risk, aside from procedure-related, is less than 1/1000.
But still, it's absolutely unpredictable. I can never forget that 40-something woman who ended up vegetative after a stupid gall bladder removal operation. She had that 0.1% unpredictable risk. We call it "anaesthesia accident", to put a technical term on "nothing went wrong, except that she didn't wake up".

Nowadays, even in Lebanon, all patients sign an "informed consent" document before having an operation. It states that you were informed of that unpredictable risk's existence, and you (&/or your family) won't sue if, outside of any medical error, that unpredictable risk does come true.
I've spoken insistently with the best Professors: it seems to be the unavoidable ransom for saving countless lives every year. Sometimes, we happen to be the cause of HARM instead, and there's nothing we can do to avoid it.
Outside from the full extent of medical competence and care, naturally. Fuck-ups are ALSO very possible.

So far, I've managed to go through life with just a serum rehydration when I got a bad gastro as a baby, and some stitches when a piranha assaulted me in dissection class. The rest was okay with mere band-aids or burn ointment.

Not that I'm in any way afraid. General anaesthesia is, essentially, just unpleasant... the few initial seconds when you wake up, and they wait to be sure you're conscious before removing the breathing tube. But... I believe that any risk should be taken only if worthwile. For fun, no. No bungee jumping for me, unless I need to flee a building that's on fire. [There ARE always a select few accidents.] For dares or machismo? Same as fun: it's futile. Take a few reasonable risks, because otherwise you stop living altogether and dare do nothing? Now, THAT's worthwhile. I still breathe air in the city, and ride motor vehicles. When adequate. A 15' walk downhill is not, I'd rather use the exercise.
It's all about choices. And they're very much personal.

Did you know that 2 out of 3 homicides are committed by people you know, and usually within your own family or home? LIFE itself is dangerous! (I even heard that nobody survives it forever. ;-) That's not to say I'll never get married. I'll just think carefully before I do. Or wait to fall madly in love, and forget all about how one thinks. :-)

Just for the sake of perspective.

In your case, Dave, with significant, even severe vision impairment, surgery appears to honestly warrant the small risk "that always exists". It's not related to the procedure, anyway.

I just find it sad to have an operation for totally futile reasons, such as "I just hate the way I look with glasses" (I've heard that one many times, it still exists today), or "I'd prefer my nose to be different, more trendy".

"I almost didn't qualify as my corneas were almost too flat already."
Yes, I'm well aware of that detail. It's another thing I tend to dislike about corneal reshaping. If it's done for myopia -as is usually the case- the procedure flattens them, and when thinner they're more fragile to trauma. While my plastic glasses are an obstacle to many such traumas. I hope techniques keep improving...

I remember that episode of Star Trek Deep Space 9, where the Captain receives as a gift a pair of reading glasses. His problem, was that they DO have in the Future a drug that fixes people's vision perfectly, but he happens to be allergic to it.
I'd say that was a nicely realistic plot, medically speaking.

Nowadays, even in Lebanon, all patients sign an "informed consent" document before having an operation.

I'm pretty sure all hospitals make you do that.