Here's a quote from the discussion under the Red Truck night picture post.

I'm still mad at Canon and Nikon for not building in stabilization in the camera bodies, many of the best lenses don't have it, and if I'd had it, I could have gained a stop or two for this shoot, would have been nice to have been able to shoot at 1/10th second and F:4.5.


Eolake said...
The Canon 5D2 is one of the best in high-ISO quality, partly because it's full-frame, and big/expensive. But like I said, the newest smaller DSLRs are pretty dang close now.

With a wideangle lens, the depth-of-field is much greater.

For somebody with more patience than me, it might be simpler simply using a tripod.

----
So I just wanted to test what I was claiming, and shot this picture on automatic, hand-held at night (not even leaning on the window sill), with the Pentax K-x with kit lens. By amazing coincidence, it fell exactly on 1600 ISO and F:3.5! And it was at 18mm zoom setting (equivalent of 28mm wideangle), and 1/25th second.
And you can see that this is also very good quality, even though it's an affordable camera and not full-frame like my 5D2. (And I have not even done any noise reduction.) 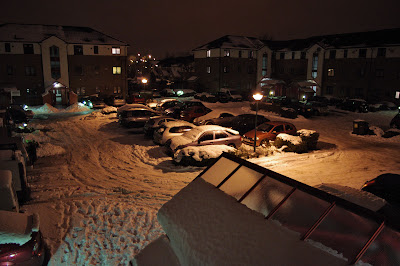 Here it is with (Nik software) noise reduction (software, often a Photoshop plug-in, which reduces noise in photos, though often at the cost of detail): I think you'll agree that's dang good low-light quality, and it's hand-held and with an entry-level DSLR with kit lens, around $600 or so.
(If you're interested, the original file is here.)

(Note: with such slow shutter-times hand-held, you should take a few exposures of each picture, to get one sharp one. Also, while the Pentax has built-in anti-shake, it's not the most powerful in the biz, sadly.)

-------------
... But a weird and slightly unfortunate characteristic about the Pentax is that, just like my old Pentax ME-Super, it tends to underexpose. Strange. I wonder if it's a philosophy of some kind that Pentax has.
Gawd, the number of under-exposed negatives I got back in the day before I found out that a camera's ASA (ISO) setting is not set in stone...
Posted by Eolake Stobblehouse at Sunday, January 10, 2010

So this is wothout any flash, I guess.

How lighted is that area when you look at it with your eyes ? Do you see it as lit as on your pic ?

A repeated theme in your image/camera related posts seems to be: Modern cameras are cheap and of high quality; just a few years ago a camera like this cost a lot more.

I'm not sure what the point is. It's like me saying: Today's computers are very fast and cost very little. In the 1980s I paid a fortune for a computer significantly slower than this one. No kidding.

1) Isn't it time we got over it already and just accepted that today's cameras/computers are cheaper and faster? Quality is relative. You have to move the baseline at some point or else there's no point in manufacturers pushing the envelope any further.

2) It's possible that we are on the verge of a paradigm shift. Both cameras and computers are about to become ubiquitous. Deliberate “taking” of photos and “using” of computers will disappear to be replaced by something better. If this is the case, then as long as we continue to compare today's inventions to their yesteryear's counterparts we are inadvertently preventing the shift from happening.

Well, I just keep getting amazed.

And another point is, example at hand: if Anna did not know that the newer cameras do so much better in low light, she would not have all the relevant data when she wants to decide whether to upgrade her camera. And clearly this was on her mind, see the quotes, so I answered.

She has done very nice work for me, but her camera struggled in low light situations, resulting in very grainy images which was unsatisfactory.