To Infinity and Beyond!: The Story of Pixar Animation Studios 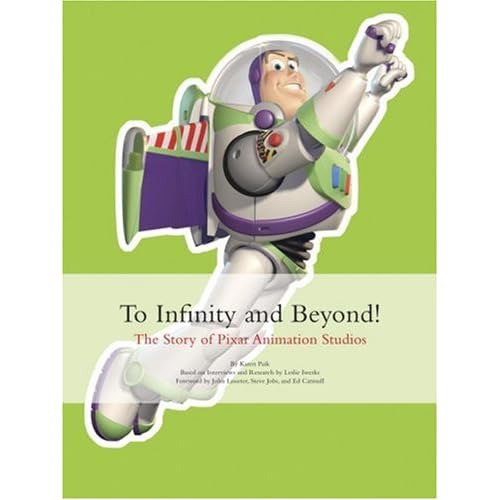 To Infinity and Beyond!: The Story of Pixar Animation Studios, hardcover book.
[High sticker price, but notice you can get it much cheaper, even new.]

I couldn't find this book as paperback or ebook, but when you get it, you understand why: it's a gorgeous and huge hardcover, big in every way, including page count. And it's beautifully produced, big color pictures everywhere, high-rez renders from Pixar films, sketches, and photos.

I warmly recommend it if you like Pixar movies or you're curious about how an animation movie studio is run, or at least can be run if it's done by these people.
This is a company I'd love to work for. People there work very hard*, but they are inspired to do so, and they are supported from every side by a company who loves fun and cooperation, and does everything it can to make both happen. For example, their third home was built from the ground up to have all the communal facilities in the middle, so everybody would get to see everybody else daily, instead of being cut off into segments by roads and separate buildings.

Fun fact: the bulk of Steve Job's fortune actually came from Pixar, not Apple. And also, when he bought Pixar in the eighties (and he supported it through a whole decade of running in the red), he thought he'd bought a computer company, which it was, with a small animation department which very few people thought was very important.


*Toy Story II was finished under such enormous time pressure (a lot had to be remade if the film were to be really good) that a number of people ended up with actual health damage from it. And Pixar took big and permanent steps to prevent this kind of thing happening again, both with scheduling of films, and with in-house ergonomics experts and such.
Posted by Eolake Stobblehouse at Monday, February 20, 2012

You wouldn't do very well there - they require employees to be creative, possess talent and have a good work ethic.