With the Micro Four Thirds system (though we had hoped more makers would join), you can mix and match lenses and cameras. Like this hilaaaarious mix. A Panasonic GH2 with an Olympus 45mm F:1.8 portrait lens, and an Olympus Pen Lite (E-PL3) with a Panasonic 14-140mm zoom. The latter is perhaps the only longish zoom lens which has not disappointed me with corner performance. And the latter is an outstanding lens despite its small size, so that inspired me to put it on the 16MP Panasonic instead of the 12MP Pana. Doesn't it look good on the large camera though? 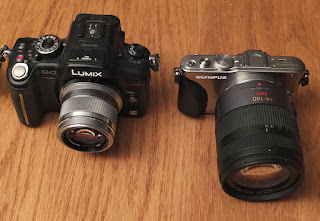 Now, though, Olympus went for in-body stabilization, and Panasonic (sadly I think) went for in-lens stabilization (which many of their lenses don't have). So now we have the Pana without any stabilization at all here, and the Olympus with both body and lens stabilization. It's probably a good idea to turn off one of them so you don't get the "too many cooks" situation.
Posted by Eolake Stobblehouse at Friday, February 24, 2012