Zeiss has launched a lens line for Canon. For many years they said it couldn't be done because Canon refused to lease the design. I don't know what changed.

Zeiss lenses are said to be very sharp, have high contrast, and a special "three-dimensional" quality.

They are manual focus though. I'm a bit hooked on automaticity. I won't swear that I won't get such a lens ever, but I'm not as amored as I used to be on high fidelity as an important principle, it is more now just one of many factors, including practicality, portability, and price. (These lenses are expensive, but far from as expensive as Leica lenses.)

Here's an interesting comparison though, according to Lloyd, two lenses of similar stats and quality, but one is under half the size and under half the price of the other. Often bigger and more expensive means better, but there are many exceptions, so vigilance may pay off. 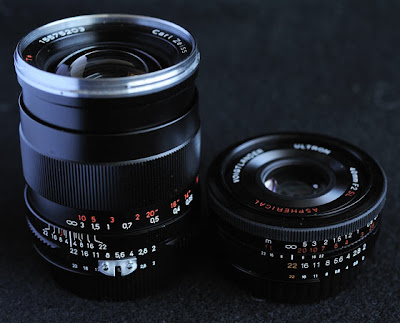