A pool in Singapore 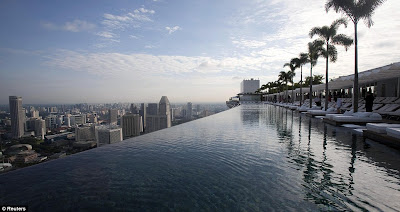 The £4billion Marina Bay Sands tourism development opened in the Singapore city yesterday, and the 150-meter long pool - three times the length of an Olympic swimming pool, was a highlight.

Infinity pools are designed to make it seem as though the water extends to the horizon. In reality, the edge of the pool is usually about an inch below the water level. The water therefore spills over the edge into a catchment below, and is then pumped back into the pool.
The concept is said to have been inspired by the terraced rice paddies in Bali, Indonesia.  They are often seen in luxury resorts such as the Marina Bay Sands.

The enormous hotel, which dominates the Singapore skyline, has 2,560 rooms and suites, a fleet of celebrity chef restaurants, shopping areas, theatres, a museum, a casino and a crystal pavilion.

The resort is set to employ 10,000 people directly and generate up to £48 million each year.  Entrance to the casino alone is nearly £50 a day - but an average of 25,000 people have visited the casino daily since its initial phased opening two=months ago.
Thomas Arasi, president and chief executive officer of the resort, said he expects to attract an astonishing 70,000 visitors a day, 18 million a year.

It was due to open in 2009, but was delayed thanks to labour and material shortages, and funding problems due to the global financial crisis.

I was about to say. They are lucky they managed to finish it.

And the upkeep! How do you manage such a pool every time there's a storm?

WILD and...WAY "over-the-top"!! I think managing to keep "the cookies" in, just trying to get to it would be the challenge! And I couldn't think of the possible earthquakes! No, no, no, no, no! There would probably be the nightmare of falling off the edge, somewhere in the mix, too! Ugh!

Yes, even without considering earthquakes, this doesn't look anywhere NEAR safe. Are there transparent glass walls all around it, or what!? A lawyer's heyday if not.

I wouldn't want to get too close to that edge.

Just HAD to take a look at the tariff ... and was VERY surprised ... there are hotels within a few miles of me that charge way more for far less ... and are regularly booked solid ... in this case, an instance of more money than sense, methinks! :-)

Interesting. What city is that?

I didn't look up these tarifs, but in northern Europe, decent hotels tend to be at least a couple hundred dollars a night, even small rooms. (Maybe less if you time it right.)

That's not a pool where you can just jump out and say "I'll go get us a hotdog..." It's not really the fall that's really terrible, just the sudden stop at the end.