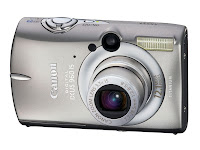 Compact digital cameras have tiny sensors. This makes for less sensitivity, which creates problems in low light. But: they do have a property which will often be an advantage: great depth of field. This means it's easy to get both the foreground and the background sharp at the same time when you want that.

In portraits you often want a blurred background, and for that a camera with a bigger sensor (a digital SLR) is better. But for landscapes and such, big depth of field is usually good.

Take for instance this picture, taken with the Canon Ixus 960 (called SD950 in the USA). It's a telezoom picture, which usually means it's nearly impossible to get the background and foreground sharp at once. And yet because of the small sensor, in this case they are. The statue in the lower left is pin-sharp, just as the figures in the front. 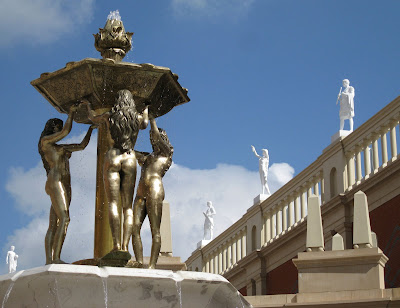 (This picture also demonstrates the overall superb sharpness and dynamic range of this little camera.)

Update: there's some evidence that you can get the same depth of field with larger cameras without penalty, here's a rather technical article.
Posted by Eolake Stobblehouse at Monday, August 11, 2008

DOF, that's a nice handle for someone.