[Thanks to Bert]
Update:
His series has been updated with a final segment, about street photography.
Look at the picture below. I think it's a good picture (rare, good use of foreground blur), and also a good example of the usefulness of the touch-and shoot screen on this camera. Normally a camera focuses somewhere in the center. May with one which has face-recognition you would actually get focus on this lady. But another way is, with cameras which have it, to touch the screen live where you'd like to focus, and the camera shoots instantly (if that feature is turned on). 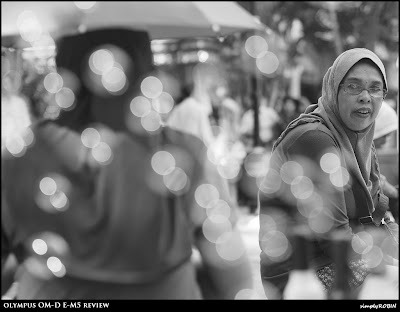 You might think that it would make for camera shake. But I find that with a bit of attention, it's not hard to hold the camera still while doing this.
--
I must admit I'm pleased to see this new camera arrive. I admit love compact cameras like the Olympus Pen, but one has to admit they are not really substitutions for professional cameras in some situations. This new one uses the same lenses, M4/3, of which some really good ones are coming out now, and it's more hardy, faster, has more features, better sensor, all around it's just a powerful camera, while still being smaller and lighter than traditional SLR cameras. I think something like this will be the new level of work cameras very soon.

Photo blogger Robin Wong has tested the interesting new Olympus OM-D EM5 camera. Video and article.
See video here with comments on dynamic range and high ISO capabilities. Both seem to be very good. (See video low on the page, he claims clean ISO 6,400!) (Almost a full stop improvement every year, this is astounding. In the film days it was maybe a stop per 20 years.)

... From the simplicity of his methods of work (no tripod, small hand-held flash), he is really getting great results. He praised Olympus' new 5-Axis Image Stabilization system, which also stabilizes the screen and viewfinder when using Live View, this was not before possible with body-based stabilization.


Notice the touch-shutter. You just touch on the tiltable screen where you want to focus, and if you've selected it, it shoots too. And it shoots immediately, the focus is so fast. This is similar to the Panasonic GH2, I think it's great.