And so to bed

I'm off to a good night's sleep, I'm exhausted, I've spent days with big upgrades of both software and hardware on my computer, it's so stressing, because it's so darn complex, and you can make such a mess with just one mistake.
(Just one example, many have tried to replace a newer file with an older one, and so erase lots of work.) (Fortunately Time Machine have saved my butt a couple of times when software had corrupted a file.) 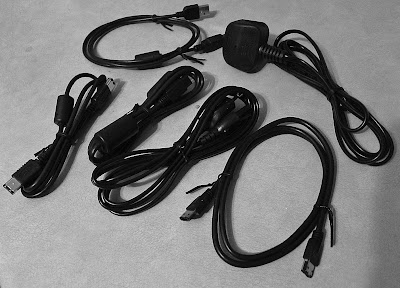 ... are the cables from one external hard disk. The cables I didn't need.
After ten years of gadget addiction, do you think I have a few cables around the house?

By the way, does anybody know what the heck this plug is? 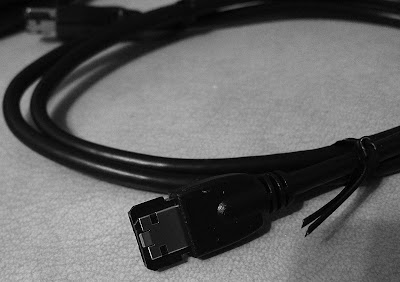 Update: thanks to Pop et all: it's a SATA, the interface used for disks inside computers these days. (Called eSATA when used externally.)
A SATA cable, eh? How about that. I didn't know they could go outside the box.

So far as I know, though, my Intel Mac Pro doesn't have such a plug (specs here). I wonder what kind of machines do, then.
Posted by Eolake Stobblehouse at Thursday, June 03, 2010

One of the iterations of Firewire.

I was going to guess firewire 1394 or eSATA.

No need to guess; it’s eSATA. That is, SATA, the latest and greatest consumer hard disk interface, but with a plug that’s better for external drives.

The terminal connection is to accomodate external drives.

I was trying to buy an IDE drive for an older box a few weeks ago, and I could only find SATA and PATA. We'd been calling IDE or ATA drives forever, and now they're suddenly PATA.

It's like suddenly having to call a Marathon a Snickers, too darn confusing.

A SATA cable, eh? How about that. I didn't know they could go outside the box.

So far as I can see, though, my intel Mac Pro doesn't have such a plug (here). I wonder what kind of machines do, then.

Serial is like the Beatles walking across the street in their famous picture. Parallel is a cluster of tubes blasting a grape across the landscape. All the grapes arrive at the same time. The Beatles arrive one by one.

Just put a PCI card (express, PCIe etc) in your PC that has SATA ports.

You can probably get them for the card slot of your laptop too. I think my newer compaq had eSATA, but my Lenovo laptops dont, though one does have "Display Port". Remember when your Mac had Appletalk, ADB and SCSI and that was it!

Just put a PCI card (express, PCIe etc) in your PC that has SATA ports.

You can probably get them for the card slot of your laptop too. I think my newer compaq had eSATA, but my Lenovo laptops dont, though one does have "Display Port". Remember when your Mac had Appletalk, ADB and SCSI and that was it!

Would such a port be notably faster than Firewire 800?

Is SATA (or eSATA) notably faster than FireWire 800? In principle, yes, but whether you experience much of the extra speed depends on your hard drive and how you use it. (I feel like trying to explain this because it helps me to understand it for myself.)

FireWire 800 can transfer nearly 70 MiB/s* while the two current versions of SATA can manage about 140 and 280 MiB/s. What slows things down the most, though, is not how fast FireWire 800 or SATA can go, but how much seeking the disk drive has to do to get to the right tracks of data.

When a hard drive is reading data, it senses the changing magnetic field of the data flying underneath the heads as the drive spins. Since the data is packed in very tightly and usually spins at at least 5400 RPM, the data flies past very fast. (In fact, the most common way of designing a faster hard drive is to pack in more data.) Unfortunately, before the heads can read your data they must seek (move) to the correct track, which is very slow by comparison.

The same principles work when the drive is writing data too. So you can imagine that the drive is going to transfer data very fast when it's transferring it, but there'll be pauses while the heads are seeking. It's these pauses, which are more frequent when the requested data is more fragmented (stored in parts of the drive that are far apart), that reduce the speed difference between FireWire 800 and SATA. If your drive can read data faster than FireWire 800 can transfer it, the excess data just has to wait in a buffer, to be transferred while the heads are seeking.

I have lots of small files in a 2.5" 500 GB FireWire box. The drive itself (at about 80 MiB/s) is not much faster than FireWire 800 so for me there would be no big advantage to using SATA, since the drive's buffer takes care of things when seeking between files. If I had a higher-capacity drive, or one that spun faster (e.g. 7200 RPM) or stored a lot of larger files (causing less seeking between files, assuming they are not fragmented**) then I would experience a bigger speed improvement by using SATA instead of FireWire.

As a photographer, Eo, you must have more large files than me (I like text) and probably some bigger hard drives too, so you'd get more of an advantage from using SATA, but I couldn't quantify exactly how much. With today's technology many of us have the luxury of realising that "what I have is fast enough" and saving our money.

Even with really big files, like high definition video, I personally can't see how FireWire 800 could be much of a bottleneck. Certainly video files could copy much faster over SATA, but don't video artists spend most of their time reading/watching video files rather than copying them? Maybe I'm underestimating the video bit-rates used by professionals...

Thing is, very few drives these days can use all 140 MiB/s of SATA — mainly some super-expensive solid-state drives, which have very different speed characteristics to mechanical hard drives. The fact that 280 MiB/s SATA is becoming common is great news for the future; you'll be able to put crazy-fast drives (when they exist) into today's computers.

I hope that made sense!

** Fragmentation is not nearly as evil as software peddlers would have you believe. At worst it just slows things down; fragmentation doesn't cause your data to disappear or burst into flames. Mac OS X automatically defragments HFS+ format drives so that you can forget about it.

Mainly I was doing idle research, I was thinking they must surely have a reason for putting yet on more interface on their external disk.
I I have a Mac Pro with four spaces for internal disks, so I only use external ones for backups-to-backups.
I guess that would mean less seeking and thus a bigger speed difference, but also that the speed is not critical.

One thing that reduces seek time is to add more platters. Each platter has two tracks per cylinder, making cylinders bigger should reduce seek time.

Consider an external RAID drive, then with each disk delivering up to 80MiB/s then it would only take 4 to max out the 240MiB/S SATA interface, though at that point I assume the RAID would use ethernet instead.