So this evening it was snowing very prettily, and I joined my neighbors Shelley (blonde) and Jen in the backyard to admire it. Jen commented that it was good snowman snow, and of course there was no way out, we had to make one. For me it was the first time I've made one in over 30 years, I think. Good fun.

Once we'd established that the girls meant the two lower balls to be his legs, Shelley and I independently came up with the big feet.
I'm not proud to say I'm the one who gave him a dong.
I am proud of the face I gave him, inspired by the Easter Island figures. Sadly in the time I took to fetch the camera, Shelley was inspired by the Rocky movies, and his pretty face was gone. :-(

They don't teach impulse control in the schools these days? :-) 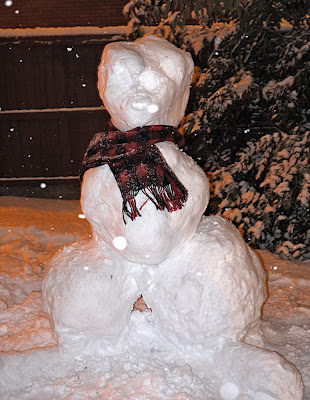 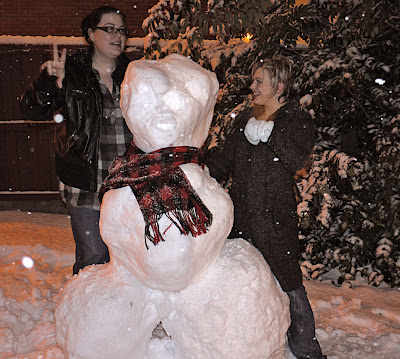 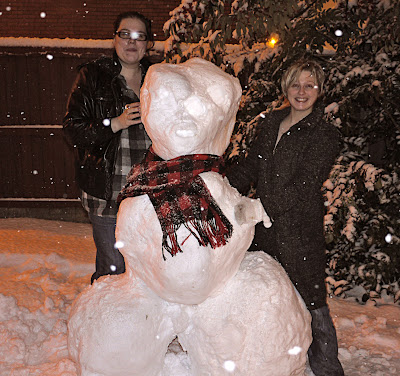 -------
Panasonic G1, kit zoom, build-in flash. Slight levels and color correction in Photoshop, and shadows-correction, all the white in the middle had made the girls and background very dark.

... Funny phenom, by the way, that the hollows, like his mouth, which normally would be darker, are the lightest areas in the photos, because the areas act like a parabolic reflector to the direct flash.

Here's something I don't understand about modern automatic cameras, especially those who measure off the main sensor: while they usually do a very good job, sometimes, like here, you see pictures were the shadows are under-exposed, and yet there's plenty of room above the highlights (there was until I levels-corrected these). Why the heck does the camera not simply expose so the whole picture fits in the histogram? It has all the data to do that.

You forgot the lumps of coal or the two rocks for eyes, and the carrot for the nose!

But you did something I haven't seen before - made the bottom of two parts instead of one big one. Good idea.

But you did something I haven't seen before - made the bottom of two parts instead of one big one.

Neither have I. Fascinating. I've made several snowman's in my childhood, and seen even more in books, movies and TV, but nothing like this has ever crossed my mind.

This may be the most profound new idea in this blog so far.

Thank you. I wish I could say it was my idea, but I'm afraid I did not see the genius of it until it was a done deal.

LOL! At least it doesn't look like you spent too much time "emphasizing" it! lol! ;-)

"I am proud of the face I gave him, inspired by the Easter Island figures. Sadly in the time I took to fetch the camera, Shelley was inspired by the Rocky movies, and his pretty face was gone. :-( "

Durn it, Eo; what about that durn camera that you usually carry in your pocket?! Oh well...GLAD you had a chance to "play"!! Good onya! :-)

Love the two leg idea. Brings me back to my childhood and the many snowmen that we made as kids.

By the way, do you neighbors know that you run the DOMAI site? ;-)

Merry Christmas to all of you.

I didn't pack the pocket cam because it was dark and I was only on the way down to the postbox.
(The S90 does have a little flash. I wonder how it would have fared here. The G1 has much more power I know.)

"By the way, do you neighbors know that you run the DOMAI site?"

:-) 95% of all porn/erotica/nudity's advertizing comes from those who hate it. And for free, too! "You can't BUY such publicity."

Speaking of which, this looks a lot more like a snow BUNNY to me.
Would explain why the carrot is gone...
Trying to steal Hef's mascot?

Gee, I've heard of DUST bunnies, but this is ridiculous. ;-)

"My, Grandma, what big legs you have!"