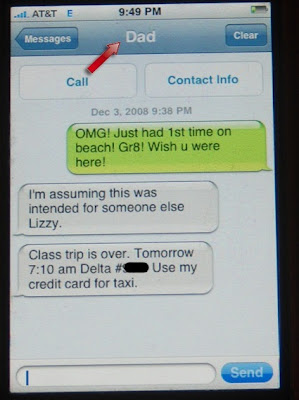 Could be worse, there could have been details.
I'm reminded of an evening back in Denmark, in a library. It was the week's late-open evening, and the library was pretty deserted, but I was there. And so were two young women. And while they were just behind a shelf I was browsing, the younger one started telling the other one how she was envious of how she had "been with" so many people while in "gymnasiet" (Danish three-year schooling for people in their late teens, comes before university). And the other one said not to worry, it would happen. And proceded to detail some of her adventures, including boffing some boy at a school party in the basement, behind a window anybody could walk by and look through.

And then suddenly they got very quiet. I could almost feel them realizing that they might possibly not be alone in the room. And they got out, red-faced and giggling, and left the library quickly.

-----
Since the advent of Amazon and me earning better money, I've bought more books than I can read. But in my yoof I was unemployed for a couple of periods, messing with my art and goofing off, and man, did I use the library! In Denmark you can borrow music and comics (graphic novels) as well as books, so that's your whole entertainment life right there (except for films).
Posted by Eolake Stobblehouse at Wednesday, December 10, 2008

Nowadays they have films (DVDs) too! At least here. I'm sure also in DK.

Since the advent of Amazon and me earning better money, I've bought more books than I can read.

If you're looking to clear out the clutter, send a few my way. ;-)

(Just none of that metaphysical, Oprah-type stuff.)

The library in the nineties did have a single shelf of videos, but it was all stuff nobody would pay money to see.

Manchester had an A/V library, strangely enough right in between the polytechnic and the university.

They carried a stock of vinyl which was more expansive than the average "Our Price" or small Virgin, but couldn't compete with the HMV and Virgin megastores.

At 10p per week for vinyl and 1GBP for a decent TDK AR90 I amassed 200 albums in my time at Manchester.

The lack of VCR meant I never felt the lack of VHS tapes. Also with 3 art house cinemas, 2 mulitplexes and two city center cinemas, BBC2 and C4 we were well sorted for visual entertainment.

For a few years in the nineties, Copenhagen had a dedicated comic book library, The Four-Colour Library. They had tons of titles, like American ones, which you'd never see otherwise. Man, I raided that place every week.

"And they got out, red-faced and giggling, and left the library quickly."
I'd say that's a social Domai moment. :-)

"but it was all stuff nobody would pay money to see."
Yeah, who on Earth would be interested in smut? ;-)

"Man, I raided that place every week."
Ah-ha! So YOU were the Attila who kept getting there before I did, and always swiped the best stuff first! Right under my handlebar-mustachio'ed nose.

If you're looking to clear out the clutter, send a few my way. ;-)

and on that note, if you have too many digital cameras... :)