Rango, warmly recommended.
With every new CGI (Computer Generated Images) movie I see (and I see them all), I get more impressed with what they do. It's astounding.
Rango is funny and avant garde. And the reality, the rendering of this super-grungy Western town and the hard-boiled critters of all kinds who inhabit it, it's amazing.

The character designs are outstanding too. Every character, even minor ones, is different and a work of art. "Beans", for instance, the love interest: she's definitely a lizard, and definitely alien to a human, and yet, durn it, she is pretty somehow.

Update:
And then there's the lighting. Just look at these, dat ain't no cartoon.

(clickable)
... I love the subtle variations in size and color of the scales. 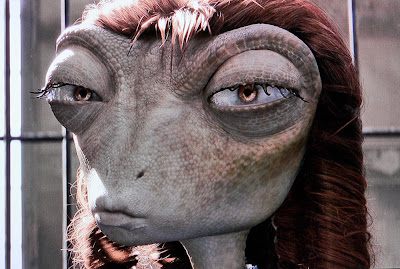 Not to mention the Acting that the animators do with computer-created faces these days; a host of little subtleties bring over the emotions.
I like movies/stories which have time for some abstraction. This has a bit: for instance in the underground sequence, there's a gigantic eye, the size of a circus dome, which opens in the side of the wall while the villagers walks by. It's beautiful, first of all. And then, nobody pays it any attention, and a moment later, someone says half to himself: "that was a big one". And it's never explained! Love it.
Update:
You always see, in the making-of's of CGI movies, the actors standing alone with a microphone, saying their lines. I've always wondered "why don't they bring them together so they can act off each other? It would have much more energy and be much more fun for them." Lo and behold, that's just what they did in Rango, and that's exactly what happened.

I guess they replaced the actors in Spy Kids. I enjoyed the previous ones.

Oh...there were more than this one?

Well...that was 10 years, ago, and...I believe that they are in this movie...just a LOT more..."growed up." One of them is part of the 2 females I was giving you a, um, "heads up" on, in the movie! You'll probably really enjoy it; I know I did and I'm not the least bit interested in the subject nor CGI!! I'm pretty sure that you'll enjoy it; subject matter, as well. :-D

'twas funny: we were trying to figure out what "4th dimension" was and then, we were given this card w/10 numbers on it which we were to scratch and sniff throughout the movie. Good idea...if the scents had worked well. Fun idea for kids, anyway! :-) I gave up after the 2nd one. I couldn't smell nuttin;' they all smelled the same! :-/

I could believe it. By the third one, she was clearly approaching womanhood fast. There was a concert extra on the DVD with her singing quite excellently, and doing a bit of that latin very fast hip-shaking thingie. Showed promise.

I vonder if dis is ze song and moves you are talkink about?

There's a couple of shots of her in this trailer and...just found a still.

Have you ever read the book? I've been finding that I prefer to watch the movie, first, and then listen to the audio. I like the visuals, rather than getting disappointed w/how the movie never quite meets my mind's expectations. :-)

(Never watched Twin Peaks. I'll take your word on it, though. :-)