I never understood why Metalocalypse is not simple called DethKlok like the band it's about. It would be much easier to remember and to spell. Why have an extra layer?

Anyway, I'm watching season three, now on Blu-ray, and wow, the visuals! The backgrounds are often just stunning. I mean, real art. Especially when they show landscapes and big buildings and flying vehicles and such.

And of course it's hilarious too.

Update:
Look at this. Notice the Sydney Opera House! This is the kind of buildings DethKlok can apparently throw up all the time.
And this fantastic image was shown for just around a second. Nuts. :-) 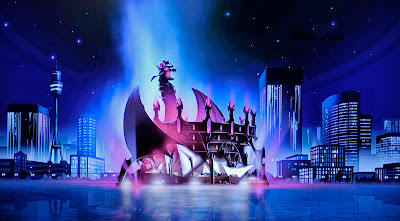 Well, when Brendon Small and Tommy Blacha were first creating the show, it was called Deathclock Metalocalypse (metal appocalypse = metalocalypse).

But they found out they had a problem with Deathclock. It was already copyrighted. So they changed the name of the band to Dethklok. And over the course of time, the show's name was changed to Metalocalypse.

It took a bit, but it's easy to spell once you get use to it.

I did figure that "Deathclock" would have already been used by somebody.

BTW, I think the band has too many members for the show. Three of the five band members hardly have personalities.

"Three of the five band members hardly have personalities."

Maybe it's just my feeble mind, but it took a long while for me to distinguish between anybody except Nathan and Murderface. Those two stand out.

Particularly the two Scandinavians could be one person as far as I'm concerned. For story telling purposes.

Well, I dunno, to me Toki was always the goofy kid and Skwisgaar was the guitar snob/man slut. And there has to be a guitar snob character if you're doing a show about metal. There has to be.