No greens at all?

I guess it's not surprising that the West has an obesity explosion...

I would think that Domino's Pizza is a good indication of what the general public like, after all you don't expand to that size by delivering what they don't like.

I don't eat pizza often these days, which has helped me lose a lot of weight, for which I'm thankful. But today I got a sudden hankering, so I looked at Domino's online menu. I was really hoping they had burgers, but the only things other than pizzas were starters and subs, so I took some chicken bits and a chicken sub sandwich.

Now, here's what amazes me: apart from the token vegetarian sub, none of the sandwiches had any vegetables in them whatsoever! Nothing, zip, zilch, nada, naught, diddley, squat, zero, none. And I did not even find an option for adding any...

After eating my sub I could hardly rise from the chair. My gawd, that is heavy stuff. This is what people eat? Wow. Don't get me wrong, I am far from the healthiest eater in the world, lord knows, but a sandwich with melted cheese as standard, but not tomatoes or lettuce or anything? Dang. 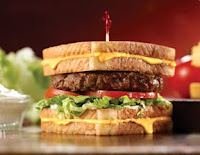 Emptyspaces said:
Here's your solution.
It has both greens and reds!

OhMyGawd!! I couldn't eat one!
Posted by Eolake Stobblehouse at Friday, August 20, 2010

In the States, not too many people of my acquaintance care for Domino's sandwiches. Domino's and places like it are generally reserved for events or parties where pizza is needed cheaply and in bulk. People still eat too much of the stuff, but it's mostly from locally-owned places that at least care about the quality of their ingredients.

Cheaply? Really? Here in the UK, Dominos is about 30% more expensive than most other pizzerias.

It has both greens and reds!

This reminds me of The Good Morning Burger from The Simpsons: "We take eighteen ounces of sizzling ground beef, and then soak it in rich creamery butter. Then we top it off with bacon, ham and a fried egg."

Of course, the U.S. takes the heat, but it's Scotland that is the home of everything deep fried. The king of them all is the "Stonner Kebab":

I don't like Dominoes and never have. I dislike their pizzas, anyway, but haven't tried their subs. Their pizzas are like cardboard. When I have pizza, I usually get it from this local non-chain place owned by Koreans.

Here in the UK, Dominos is about 30% more expensive than most other pizzerias.

I just clicked on the link to that burger. I guess it puts the stonner kebab to shame.

If you were feeling like a burger but went for [mostly] chicken, KFC has this "lovely" 'Double Down' "burger that seems to still be on their menu." :-D

emptyspaces - Oh man. Just the picture makes me want to throw up.

The home solution would be to buy a few kilos of salad, tomatoes, and keep them in the fridge for further consumption.

But if one wants to eat out, what to do... Maybe bring your own vegetables? Would be a funny movement to start, maybe would make these places a little more aware about the food they are making.

I love how Mac Donald introduced all kinds of salads after the film Super Size Me. I thought it affected other companies too, but maybe not. I confess I am not eating in those places, just in MacD 2 or 3 times a year, in emergency cases.

"Just the picture makes me want to throw up."

Me too, after I realized what I was really looking at.
Why not throw some hot fudge on it too?