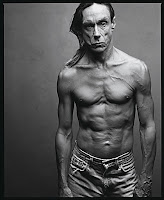 Interesting Iggy Pop interview.
I am watching a documentary-slash-concert-film about the Stooges. Interestingly, I find the interviews more compelling than the concert footage. For one thing, they avoided playing any songs from Raw Power, which to my mind is the strongest Stooges album. [Update: I just now see from an Iggy docu on the disc that on the third album, the Asheton brothers were not there. I don't know how they could call it a Stooges album. By the way, Ron Asheton just died in January of a heart attack.] And in extension of that, I don't think Iggy is the greatest song writer on the planet, all my favorite records of his were done in collaboration with Msr. Bowie. (Bowie produced Raw Power. Iggy claimed he ruined it, but see what a classic it became.)

I am sure the girls still love Iggy, even at sixty. His stage persona is as kinetic as ever, he is fit, and he's continually fighting the tendency of his trousers to fall down. (I don't understand why he doesn't just buy a belt or suspenders...)

I always find it interesting when an artist manages to still be on top after 40 years. That's just a super-human accomplishment.

... In the middle of Iggy's interview, he got up and stretched, and asked how far they were. When they said 33 minutes, he said "aha, so a little over half." And the interview continued, and he continued to answer questions in a very pleasant and sincere way, even when the interviewer for some reason included a few questions like "what's your favorite color". And then when the interview had lasted an hour, suddenly he got up and said "I guess this is it". No rounding off, no by-your-leave, nothing. Isn't that odd behavior?

Here's Iggy's The Passenger (disregard the video) And China Girl. These are both great songs, which I prefer much over the very early Stooges material. I'm reminded of about 20 years ago, friends who were musicians made an amateur band specifically for me to be able to sing China Girl. It was brief-lived, but fun while it lasted. I mixed elements of both Iggy's and Bowie's performance of the song. I think a more lyric approach than Iggy's energetic one is more fitting for a melodic song like this.
Posted by Eolake Stobblehouse at Thursday, March 19, 2009

I saw Iggy Pop with his shirt on once. In Munich airport in 1986. He looked like any other passenger.

I look very much the same (ref flickr), I could cope with this guy in a model show!

I think there's no doubt that Iggy's ugly. When I was little I even found his face scary.
Then how come today I feel this thankless face is that of a real cool guy? I can't help it: I've seen a little of him a few years ago, and I was just positive. I can often "feel" nice people whom I'd love to meet, and so far I was never mistaken.
Then again, when a rocker just LIVES that long, not to mention keeping his game, it suggests he's got a bit more smarts than the typical average.

But I might be wrong. I never imagined he'd do the sacrilege of wearing a shirt!!!
"He looked like any other passenger."
(sigh) You've just shattered a myth for me. :,(

Actually, the Ashetons were on Raw Power, but Ron was playing bass instead of guitar. That's why it sounds a bit different from the other Stooges records, it's a different guitarist.

I was really saddened when I heard of Ron Asheton's passing earlier this year. He was always one of my favorite guitarists. RIP

That's odd, why would the documentary make such a grave error?

Irritatingly, I read your comment just seconds after submitting most of this post as a review to three different sites!

Thank you very much.