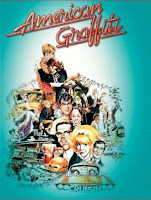 I'm just re watching American Graffiti. That's a wonderful George Lucas movie, and it's hard to credit just how different it is from Star Wars.

I'm not a car buff, but the cars in this film are just luvverly.

Why would they make a sequel to a movie like this? The story was all about one single night, that was the whole point.
... Looking it up, though, it seems they did the sensible thing and made it very different. It also has good reviews, so maybe I'll check it out.

Update: There's an outstandingly good making-of documentary on the disc, and it's 75 minutes long! What one doesn't realize is how groundbreaking American Graffiti was. It was one of the first films to use an all-rock soundtrack, and to make the music sound like it was playing in the environment. And it was very hard to get made because Lucas wanted the four stories it tells to be interwoven with each other, not told sequentially, and the studio refused to do it this way, because it had never been done before. These days it is the way you do things.
Posted by Eolake Stobblehouse at Monday, August 18, 2008

Why would they make a sequel to a movie like this?

Because somebody believed there was a buck to be made. This single sentence explains about 99% of the behavior of Hollywood. The remaining 1% is reserved for creativity.

It is actually, a pretty good movie. Life moves on, and here in the states, a little country in S.E. Asia sort of of took over everything....VEEE..ET...NAM.

Kind of played hell with all sorts of stuff, regardless of which side you were on.

The sequel goes to Vietnam.

Women with out clothes, is much more interesting, however.