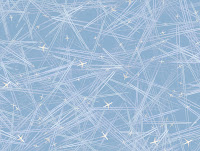 "Big Numbers" is not the title of this art, it is just a title I gave it, a nostalgic nod to an Alan Moore comic from the early nineties which sadly was aborted. Sad because it promised to be one of the most seminal "comic" books ever made. It was totally ground breaking both visually and story-telling technique wise. Only two of ten issues came out, and it seems no more ever will. I miss it.
Posted by Eolake Stobblehouse at Wednesday, April 18, 2007

Is it just me, or are the skies getting crowded these last few years?...
"Up, atom, and away we go!"

I noticed in visiting his web site that Chris Jordan's work was on display here in tiny San Marcos, TX just one month ago, but I didn't hear a word about his installation! This is not an artist town,,,, yet.

Chris makes for quality creativity but all too negative. He is a merely a graphic cartoonist making every progressive thing into a political dungpile.

MY RANT:
It is my belief that this pervasive and negative attitude, led by the world's collective liberalism, is forcing a check on the U.S. in it's critical desire to help Iraq become like us, a free nation, free of radical Islamists, free to live. These radicals, the Sharia leaders like Ahmadinijad are laughing all the way to the NUKE bank. They are preparing to fix all the world's woes, intent on reducing the global population and free to by fiat. We as a civilization have not learned anything from the destruction of the World Trade Center, have we?

We are not the enemy! George Bush is not your enemy! Realize this, when the fight for freedom is defeated within, it's all over, for all.

Lorin Friesen wrote: "We as a civilization have not learned anything from the destruction of the World Trade Center, have we?"

Some of us have. You too can learn about it from 911Truth.org or from the Scholars for 9/11 Truth.

Well, I've definitely learnt something from it: too many planes piloted by too many idiots is a disaster waiting to happen.
I'm not taking my flying lessons in Florida, that's for sure! The graduates from these flying schools have a bad rep.

I have seen long ago the details of what you share with me as fact. The idea that a President can pull off the greatest scam of all time, secretly working with the mighty corporations, bringing in a major family of religious terrorists, then having our military and many others murder fellow countrymen?

And even now after five years being been able to keep everyone hush hush, no one spilling the jelly beans so to speak? What would be the logistics of such a plan staying quiet be? How many conspirators would be required? Don't forget that we are good people with heritage and many would be married with families and us Yankee's can't keep secrets from them.

You are not an American so I forgive you your beliefs. Even here there are too many who claim to think the same as you. I recognize them as mindless followers of chaotic thinking.

I believe that many democrats lost faith in themselves in the 2000 elections. Their power to legislate was gone after years of continuous control. In their discomfort they cried for pure democracy though we have lived well as a great Republic for centuries!

The sad outcome we are seeing today is the selfish nature that grows and foments hatred. Their politics are saying "NEVER AGAIN", never again will we loose our power!! The globe exists today in a growingly violent and threatening world, and we,their fellow Americans are not the enemy!!!

I have hope. I have faith. I hold to the freedom and democracy that our fore fathers established. We do not lord ourselves but will defend ourselves when threatened. We will fight to the death for our liberty to speak our minds. Yours is welcome also.

lorin friesen wrote: "I have seen long ago the details of what you share with me as fact."

I have shared no facts with you. I merely provided two links that discuss the subject you enquired about.

My point is, if you want to learn about 9/11 you would be well advised to get your information somewhere else than mainstream media (who have been proven time and time again not to be trustworthy).

The group of scientists voluntarily researching the subject would probably be your most reliable source. But 911truth.org is good too.

I don't think anyone has an accurate picture of what happened that day. But thanks to these research groups the puzzle may one day be solved.

Is it just me, or are the skies getting crowded these last few years?...

The skies are indeed getting crowded here over Europe, as one can see on certain days by the loads of vapour trails caused by all the jets.
And I crave when I see them. They look beautiful, but they contain the lethal mixture of kerosine exhaust and carbondioxide, being spread across the earth like an invisible cold blanket.

Anonymous said...
"The idea that a President can pull off the greatest scam of all time, secretly working with the mighty corporations"...

I had no idea this was a secret to some?!
He's not bothering to hide it very much...

"I believe that many democrats lost faith in themselves in the 2000 elections."

We should be so lucky! :-)
"To be a good politician, all you need is a clear conscience. And this only requires having a poor memory." -- (Coluche)

"In their discomfort they cried for pure democracy though we have lived well as a great Republic for centuries!"

Speaking of which... could somebody please explain to me the difference between a Republic and a Democracy? And which of the two the USA are, exactly?

Being deliberately consensual again, are we? ;-)
I bet if George Walker Bush, Osama Bin Laden, and all their respective top advisers, got together to clear it up, they still wouldn't succeed.
The only one to have a truly clear picture of a messy and smokey battlefield is the Angel of Death, doing his job.

"One shall emerge a victor, and that one shall write History and become known as the Good Guy."

"could somebody please explain to me the difference between a Republic and a Democracy? And which of the two the USA are, exactly?"

And the problem with republics is that the representatives tend to be interested more in their roles as keepers of power than the functioning of the country. And as long as people give them leash in this, either through taxation, or through various indirect means of funding, the representatives will happily come up with more and more issues in need of a goverment program. The government then tends to grow until it gradually reaches a state of fascism, or sosialism, as it is sometimes called.

Then the Democrats have chosen a silly name! :-P

TTL said...
"The government then tends to grow until it gradually reaches a state of fascism, or socialism, as it is sometimes called."

Okay, I'm not going to ask the difference between THESE two! I've learned my lesson.

"Capitalism is man exploiting man. Socialism is just the opposite." -- (Coluche)

"One half of the politicians can't do anything, the other half would do anything." -- (The same)

Democracy: Two wolves and a sheep voting on what to have for dinner.

Representative democracy: Two thousand wolves and one thousand sheep electing two wolves and a sheep who vote on what to have for dinner.

Constitutional republic: Two thousand wolves and one thousand sheep electing two wolves and a sheep who vote on what to have for dinner, but are restricted by a Constitution that says they cannot eat sheep. The Supreme Court then votes 5 wolves to 4 sheep that mutton does not count as sheep.

And what do you call it when there are wolves, sheep, and lettuce heads all voting?