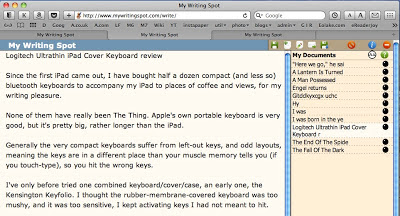 MWS uses Google's authentication system to save the documents, so you need to have a google account (but not necessarily a Google email address).

Posted by Eolake Stobblehouse at Tuesday, May 28, 2013

MWS uses Google Documents to save the documents, so you need to have a google email address.

There is no need to have a Gmail address in order to use Google Documents (or Google Drive, as it seems to be nowadays called).

Thank you.
I asked Peter for info, and he tells me:

"Also, one other thing I noticed in your entry - My Writing Spot does not store its data within Google Documents. It is a completely separate system, and has its own data store that is not connected to Google Docs."