The tied bolts on a propeller (updated)

I came across this photo from Kelly Trimble in my Light From A Low Sun contest (you'll have seen it if you saw the finalists' gallery). And apart from the beauty of the machine and the photo, I now noticed the strings in the bolts. And I noticed how they go across in a way so if one bolt should loosen, it'll only tighten another bolt, so they keep each other tight. Ingenious!

I mentioned it to our resident Engineer Extraordinaire, Bert, and he told me that not only are the bolts still done like this today, but it is a crime to tamper with the strings if one is not a certified airplane mechanic! 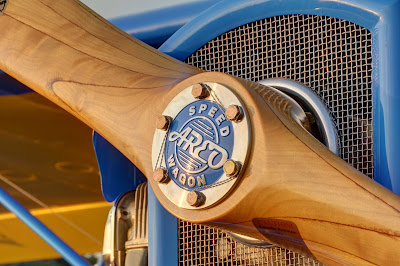 Kelly wrote to me:
A few weeks ago, a friend completed a homebuilt aircraft.  Before the maiden flight, I took several photos.  He had to wait until late in the day for the winds to die down, so I got several with the sun just over the horizon.  I call this photo 'Before the Maiden Flight".
[...] The subject of that contest photo, however, was the prop spinner hub.  The builder owns a machine shop, and is famous for going 'over the top' when fabricating otherwise unexciting parts for his own use.  That propeller spinner hub was not cast--it was machined from a solid aluminum billet, letters and all.  If a customer had contracted for that part, it would have probably been a two thousand dollar machining job. 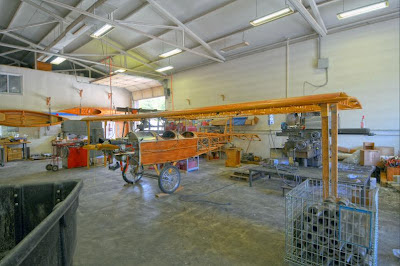 I have included some photos of the plane with Wayne Edson of Hollister, Missouri, the builder.  You asked how much of the plane he built himself.  Actually it was Wayne together with his father, and they built almost all of it.  The design originated in the 1920s with somebody named Pietenpole, and there have been hundreds of this design, which is now fairly standard, built over the years all over the world.  Most people who make homebuilt aircraft will usually buy a kit with most of the parts already fabricated which they then assemble.  Since nobody owns the design for Pietenpoles, nobody makes a kit, but most of the components are commercially available.  However, Wayne owns a fairly large machine shop with around a dozen CNC machines and a foundry pattern shop (essentially a large woodworking shop), so he is well equipped to fabricate a lot of the parts that most people would have bought off of the shelf. 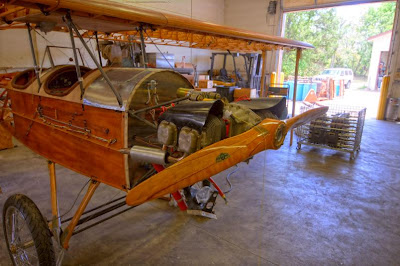 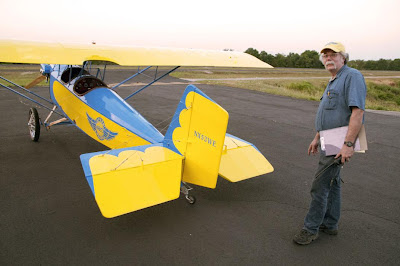 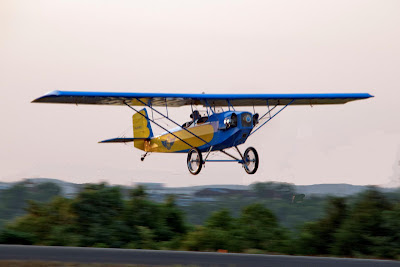 At one point, they used me for ballast while temporarily attaching the engine: 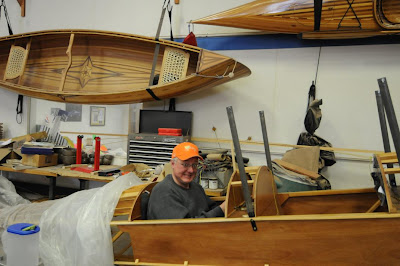 For us laymen, "string" is the inclusive term. It may legitimately include chains if the speaker is 8 or less.

You will find these safety wires all over the engine and other places bolts are used. Vibration is the foe here!

Although the vibrant blue and [canary] yellow are very cheery, I think the natural wood color would look so much more beautiful; kind of like a gorgeous wooden interior of a small yacht. :-)

Are we allowed to use links?

Yes...really beautiful. I was noting same when I was looking for a yacht image. (You can pic from a gazillion here. I just LOVE the warmth and beauty of natural wood. :-)

(Gotta "love" (not really!) the captchas, these days; they're looking more like a blurry eye vision test! lol!)

Anon, normally links are OK. Thanks for this one. Kool to see.

Yes, cool pliers.
I heard of a large pro screwdriver which worked on the same principle. It worked better and faster than any electical one. He ran a handle up or down a spindle shaft, and bam, the whole screw was in, or out.


Somebody in a comment on your site asked why he painted it blue and yellow. He said that he was in our shop (Ozarks Auto Show) and my father showed him a photo of an airplane with those colors that looked really good, but when they painted this plane the same colors, it didn't work as well.

"Although the vibrant blue and [canary] yellow are very cheery, I think the natural wood color would look so much more beautiful; kind of like a gorgeous wooden interior of a small yacht." (above) They are nice colors; I just thought the warm colors of the plane's wood looked kind of cool, in and of itself. :-)

Thank you for sharing this cool project w/Eo. Very fun to see! :-)