In the new UK Google ebook store, "I, Partridge", told by a fictional character, is labelled as non-fiction. That's hilarious. And according to reviews, so's the book, so I bought it. 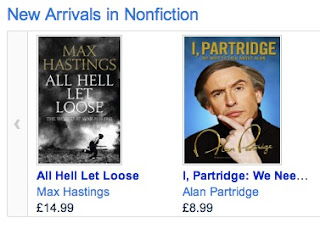 It's funny too that Alan Partridge is the archetypical example of a character so successful that the actor Steve Coogan just can't get away from it no matter how hard he tries. What's funny is that for people like that it seems to be highly frustrating, while millions of media hopefuls would sell an eye to get that kind of success.
Posted by Eolake Stobblehouse at Tuesday, October 18, 2011