Ekstra BIadet, a newspaper in Denmark, has had it up to here with Apple’s App Store policies, and the publication has published a series of protest articles on the subject, including the political cartoon below. According to the newspaper, Apple rejected its iPhone and iPad apps because of a nude photo feature, even for the Danish-specific version of the App Store. 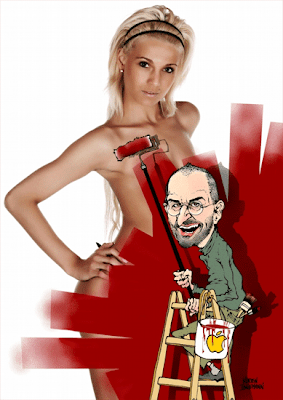 I find myself in the unusual position of supporting the Danish newspaper on this one. Because it's a terrible rag. How terrible? So terrible that when I as a young and poor man was offered the sale of a photograph to them, I said no, I refused to have anything to do with them.

But they do have one good thing going for them: for the past 25 years they have had a lovely nude girl on page nine, every day. And this of course is what Apple is against. Apple who I normally love and support. Oh, the irony! (Swoon.)
Posted by Eolake Stobblehouse at Wednesday, December 08, 2010