Just watched Scrubs Eight. It was a leeeeettle bit looser, you could feel they all knew it would be the final season, but still a highly enjoyable sitcom, I recommend it. Wonderful stuff. It's virtually unique in it's combination of drama, humor, zaniness, and warmth. 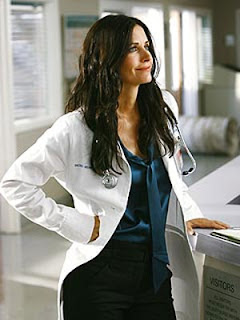 Courteney Cox guest-starred in the first one or two episodes as a super-charming, but ice cold new chief of medicine. Gawd, that's a beautiful woman. Not only that, but at 45, she could still pass for 29.
Posted by Eolake Stobblehouse at Wednesday, September 16, 2009

Maybe the Scrubs make-up artists and photographers are especially good then, because I didn't think she looked any different on that show than she did in early Friends.

I haven't seen that Scrubs, so you could be right. I have seen her in a few other things, like Dirt and she looks like a hot 40-something. Nothing wrong with that.

Are you guys for real? She's flat chested and so scrawny she looks like an inmate of a concentration camp. Pass!

I saw a preview of Cougar Town. She looks very good in that.

Hard to say if the show will be good or not.