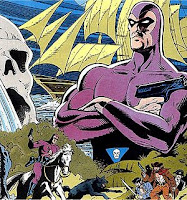 The Phantom newspaper strip has been running continually for nearly 70 years! Holy cow. I really respect that.

I was a big reader of the monthy Phantom comic as a kid. The Phantom was much bigger in Scandinavia than in the States, with tons of monthly comics stories being produced and published by Egmont in Copenhagen, which also produces tons of Donald Duck comics for many decades. It was odd for me to find out that a Danish company was doing this, when I thought that only the "big countries" had the muscle.

And apparently the monthly comic (bi-weekly?) continues even today in Sweden. I haven't seen a Danish version for many years, I think.

I was amused to remember that seemingly every story at some point had the Phantom ("Fantomet") being knocked unconscious, and usually had to be rescued by his dog.

At least the costume in Scandinavia is dark blue, not purple. I mean, purple? Really? In the Jungle?

His costume by the way is remarkable, it's apparently the first skin-tight superhero type costume created. Which makes it even more remarkable that it was made for a jungle hero. I mean, he really does not look like a jungle warrior. Just for one thing, he has no camouflage.

The Phantom is at least as silly as any other superhero, but it has some basic appeal, on almost a kitch level. The idea of the custome being passed on from father to son, so everybody thinks he is 400 years old (470 now), is great. And the cranium grotto, and so on. Wonderful stuff.
Posted by Eolake Stobblehouse at Wednesday, July 30, 2008

When you're in the jungle I'm not sure that blue is a whole lot better than purple. I mean purple is royal, after all. Blue is just plain old blue! I guess a camo uniform would really have been best.

But what really makes it work is that little mask thing he's got on there. The Spirit must have thought it was a good idea.

I like the idea of the Phantom not being one guy but passing the role down through the centuries. It means you don't have to deal with the crap that other heroes have to deal with involving the passage of time. Spider-Man was a teenager in 1962, and he's barely moved on since although the world around him continues to change.

Yes, I only prefer blue over purple for aesthetic reasons. It should be green I guess.

Well, purely aesthetically I prefer purple, it so much richer. Blue=blah.

Still, it may be just whatever you're used to. For me The Phantom has always been purple. It seemed normal.

Well, blue in nature is the color that means: "WARNING! I'M TERRIBLY DANGEROUS!" even more strongly than bright red, just look at the amazonian amazingly toxic tree frogs. And bright colors are always a plus when you're counting on the rescue helicopters... ;-)

You're right, BTW, this was officially the very first skintight super-hero costume. (Well, if you don't count Tarzan's speedo and SKIN. They don't come any tighter-fitting than THAT.)
But I hope in 470 years they washed the family leopard... I mean leotard occasionally, or the smell would warn every living creature even before the color appeared at the horizon! Warn then, and ward them! I mean, jungles are stuffy. (EYEW!)

I loved how the old wrinkled Vulture, in Spider-Man's adventures, ALSO went with the form-fitting costume. Must've made him the most dreadful villain in history! (And that GREEN! Oh my! Honey, this nuance is just too gauche, really. Totally passé. What were you THINKING, dahling, I mean, really!)

"And the cranium grotto"
Yeah, that has to be the most unconspicuous lair ever, second only to the bat-shaped cave in Pirates of the Bermudas: Shield of Captain New World. Or something...

"Spider-Man was a teenager in 1962"
And he hasn't grown emotionally since, always the same whining wuss. (Oops! Sorry, R.A.F., that was YOUR line.)

"It should be green I guess."
But then, the moment you do the laundry and hang it to dry, you lose it for good. At least, purple doesn't instantly vanish in the surroundings. You've got to be considerate for Mrs Phantomette's daily housework. I mean, "cranium cavework". ;-)

Yes, the Vulture was a very odd villain.

Spidey is more suffering than whiney, I think. Buffy, now there's a whiney "hero". And always letting demons off the hook, presumably to not risk running out of them.

Something that struck me as funny about Buffy was how many people got off the hook for murder because they were in with the heros. Willow (justified or not) tore a guy's skin off. Angel killed several people after losing his soul again. Spike killed lots of people. I don't know if Xander ever did, he must have felt he wasted his teen years never having killed anyone. Who ever went to jail? Faith. At least she never threatened to destroy the world. Then they all joke about it afterward. I guess it's okay as long as, after you're all murdered out, you devoted yourself to saving people to make up for all the lives you've taken.

And he hasn't grown emotionally since, always the same whining wuss.

I'd say he's moved on, but not always in a good way. For the real-life nerds, geek, dweebs, spazzes, etc. who identified with him in his earliest comics it must have seemed a slap in the face when he stopped wearing his nerd attire, started getting dates, and went to college. He even shed his glasses early on. He ends up marrying a model. Maybe they just wanted to show the full nerd fantasy - after all Flash Thompson, former Big Man on Campus, ends up a big loser after high school. Which is something nerds dream of. It's no good if the Football Hero goes on to become a millionaire in the NFL. No, it's much better if he ends up selling used cars.

Yes, it was quite dramatic how many of the good guys on Buffy became or had been killers. Forgiving bunch.

The Faith point actually confused me. She came back in season seven, and they said she'd been to jail. But when did that happen? The last I recall before that was her taking off into the blue in a bus.

I'm sure you're right. They seemed to assume we watched both shows.

I gave up on Angel after season three, it lacked the humor.

Vulture was very odd, yes. Stange, bizarre, unusual. I think the most fitting word might be "queer". ;-p

"And always letting demons off the hook"
Hey, hooks are painful. (Ask Jesus, he only got nails, and already it hurt to death!) Plus, she's just living her principles of trust and forgiveness: nobody's all bad, let's give them another chance to make amends and change their ways. Or to succeed in killing my friends with a smarter plan, that's ALSO self-improvement. Every little bit helps.

" I don't know if Xander ever did, he must have felt he wasted his teen years never having killed anyone."
HAHAHA! Now THAT is a joke they really should have made on Buffy!
(But sweet WILLOW? I missed that one. Never expected her to have such ferocity in her.)

"[Peter Parker] even shed his glasses early on."
It's nice that they bothered justifying it in the movie. His powers made his eyes as fit as the rest of his body.
I wonder: he wears red-and-blue, can leap tall buildings, dodge bullets... does he have super-hearing too?

"Flash Thompson, former Big Man on Campus, ends up a big loser after high school."
Now THAT, see, that's very realistic. I mean, since he wasn't the son of a Governor or anything... ;-)
Becoming overconfident because you're über-popular in college, you'll lose sight of the fact that not everything in life comes easy. And the NFL is VERY competitive, for one.

"Yes, it was quite dramatic how many of the good guys on Buffy became or had been killers. Forgiving bunch."
They must've read "Disappearance of the Universe"? I mean, hey, there's more to life than the Biblica Satanica, the Dracula Sanctous Hagiographica, the C'thulhu Compendium Cannibalis and the Necronomicon Ex Mortis. Besides, those are for work!

"The Faith point actually confused me. She came back in season seven, and they said she'd been to jail. But when did that happen?"
Oh, ye of little Faith! Trust the Writers, will ya?

"I gave up on Angel after season three, it lacked the humor."
I gave up on Buffy even before that. Not only were the studies hectic (mine, in real life), but they had lost the spirit that made me love the series in first season. SO the drama: they became more serious. Like a buncha boring adults! Like, major bummer, yo. ):-P

Oh, you must get the 7-season box set. Willow is at her very best when she is evil, trust me. Zzzzzexy. She was evil twice, once in an alternate-universe vampire version, and once as a "Dark Phoenix" kind super-witch. Alyson played both to the hilt, she is outstanding.

I didn't care for regular Willow, but that vampire Willow?! I'd be put in chains and ridden like a pony. Other Universe Angel loved every second of it.