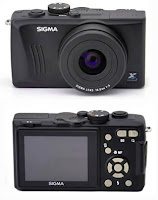 Sigma attracted a lot of attention from discerning photographers when they announced the DP-1. But the camera has a much longer time to market than expected. So they have just made this announcement.

I think it's refreshing, both that a big company takes quality so seriously, and also that they will make an announcement like this directly to their customers, instead of talking only to the press and to dealers.

It also gives a small impression of how damn complex making a good digital camera is. Personally I don't get it, I'd have thought all the basic problems would have been ironed out years ago. But this is clearly not the case. This is also illustrated by the fact that big, venerable companies like Kodak and Contax brought out big, very expensive cameras which were failures because they simply weren't good enough.
Posted by Eolake Stobblehouse at Friday, November 30, 2007