Thoughts on 'The Wall' 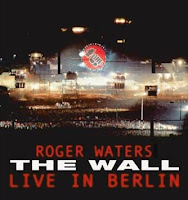 I'm just watching The Wall - Live In Berlin. It's excellent, maybe better than the movie. It has a strong sense of event, and many outstanding guest stars.

Back in the eighties when the movie came out, I went to see it with my roommate and my girlfriend. My roommate and I were both fans of the music, and thought the movie was pretty awesome. But my girlfriend commented: "when I was in nurse training, they showed us a movie made to illustrate how the world looks from the mind of a schizophrenic. But I think this movie would have done a better job."

And she has a point. The story it tells is pretty damn depressive. "... dragging behind you the silent reproach of a million tear-stained eyes..." One might get the idea that Roger Waters is not a happy-go-lucky kinda guy. :)

But dang, the music is good.

One of the guest vocalists is Ute Lemper, singing on Thin Ice. I was not aware of her. What a beautiful woman. What a voice. What a nice dress... so virginal and proper, and yet so sexy.

One of my friends was there in 1990 in Berlin. He still talks about it.
There was an uncounted number of people, but it might be over 200,000! That's a lot of audience. And yet they say the concert did not yield the intended profit for charity. Weird.
Posted by Eolake Stobblehouse at Monday, June 25, 2007

Man, I love The Wall, and I love the lyrics too. The idea of building a psychological wall between yourself and the rest of the world is something I can personally relate to. Rather accurately describes several years of my life I'd say.

The Wall is one of the great rock masterpieces. Right from the opening number it is so powerful and captivating.

Still I remember being somewhat skeptical about the Berlin concert. It sounded too ad hoc to be able to work well. But Roger Waters proved me wrong. Big time.

Eolake's friend said: "... how the world looks from the mind of a schizophrenic. But I think this movie would have done a better job."

The message is as timely today as it ever was.

I cannot say I regret going to Yougoslavia that summer, but man if I would have worked out what was going on. Jean Michel Jarre played "La Defense", the third arch in Paris, and two weeks later Roger Waters played The Berlin Wall. Can you imagine a European vacation that started at one concert and ended at the other?

I found the liner notes to "Shine On" - the CD boxed set, to be pretty informative about The Wall, and more interesting was the live album released a few years ago from the 80's tour - "Anybody Out There".

The next thing you guys should do is to watch the DVD of the wall, and listen to Roger Waters and Gerald Scarfe talk about his illustrations for show.

Personally my favourite bits from Berlin were Sinead O'Conner, Thomas Dolby and Tim Curry. Brian Adams did a good job on Young Lust. (Was that Johanna Whalley in the movie).

I think this is a guy album, very few of the girls I know get it, but most the guys do. Think I'll listen to it now.

"Still I remember being somewhat skeptical about the Berlin concert."

No kidding. Very unrealistic scale! Must have been horrendous to organize.

Yeah, I think my then-girlfriend was one of those humans who are generally contended and don't feel strangled by the authorities of this world. Very strange. :)

But on the other hand it does not seem anything really bad has happened to Pink, he is mostly making his own problems.

So what is the consensus of adding "The Tide is Turning" to the end of the concert? I find it a fitting encore. This track originally appeared on Radio K.A.O.S. and was about Live Aid.

Speaking of which, I tried to find the clip of Midge Ure and Bob Geldof in Comic Relief collecting for charity. Can't find it anywhere. I believe Stephen Fry was the businessman they were trying to collect from.

There, I managed to mention 3 charity concerts in one post!