The images of woman 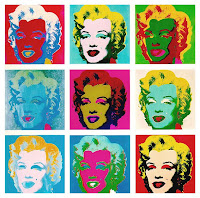 The images of woman.
Posted by Eolake Stobblehouse at Thursday, May 24, 2007

I think the man who had these photos printed should change companies, or find himself a better printing press. This one looks broken.

What was the name of that photographer again? Inda War-hole, or something?
Probably another Woodstock hippie activist, all about "peace and love and beautiful women and nudity"...
I'll bet he was always high on some anti-social prohibited vegetal substance that makes you see colors. ;-)

Ah-HA! A sure Sign from "Above": the Captcha that just appeared when I posted this here comment above read "ddope"!

He makes some interesting points... thanks for posting this one, Eolake.

Goodbye Norma Jean. Candle in the Wind. Elton and Bernie.
Another tragic loss of life. But even famous people overdose and or die young.
Didn't care much myself for the prints but everyone has different tastes.

Didn't care much myself for the prints.

Neither did I. Rather boring. Yawn, stretch, nap time.

The prints, like most of what Warhol made, are not art in the traditional sense, they are events. Statements. You may or may not like what they say, but you can't deny they've had an impact.

Terry,
Until this day nobody can tell for sure that Norma Jean's death WAS a suicide. I don't have any certainties, but I'm keeping healthy doubts about this affair. Even if I don't expect to ever see the final truth becoming public.

Eolake said...
"You may or may not like what they say, but you can't deny they've had an impact."

A framed poster once had a strong impact on me. On my head, to be precise.
It fell off...

Norma Jean's death WAS a suicide.

Yes, it was ruled a suicide. She had enemies as well. I'm not much into conspiracies with the exception of 9/11.
But if Monroe was murdered God will reveal it during the Great White Throne Judgement.
It is a fearful thing to fall into the hands of the Living God.

fallen darkness said...
"But if Monroe was murdered God will reveal it during the Great White Throne Judgement."

I don't think this will happen in my lifetime, though. So if I'm the kind to die of curiosity, I'm toast.
Extra-crispy.
With melted butter on top.

Okay, more seriously now, that was a great article by Mike Johnston. Very interesting read, thought-provoking.
I like people who think. :-)

Very interesting read, thought-provoking.
I like people who think. :-)

That's why I like you Pascal and Eolake. Also because you men respect others as well.