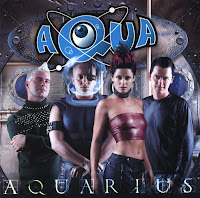 Holy mama, it's been over ten years since Aqua debuted with Roses Are Red, which broke records (and CDs), and it's been five years since the group broke up, and they are still a big name. That's impressive.
Their second album was not as big a hit, but it had at least one good song: Cartoon Heroes (which had a nice high profile video.) ... Oh, and it also had the more subtle, very melodious We Belong To The Sea.

From the wiki article: "The lawsuit filed by Mattel over the song "Barbie Girl" was thrown out in 2002, with the judge refusing Mattel's claims that the song harmed the doll's reputation. The judge claimed that, as the song is a parody of the doll, it is legally acceptable. He also advised the parties involved "to chill"."
Haha. That's excellent. I've often been surprised, given everything, to find that many judges are extremely level-headed, sensible, wise, and down-to-earth people.

By the way, am I the only one for whom YouTube gives up the ghost after watching a few videos? They just stop loading?
(Or this really bizarre phenomenon: in Safari the sound stopped loading on new videos. (The one I had loaded already still played fine.) In Mozilla, the same. But in Firefox, the sound played, but only over the tiny speaker in my box, not my speakers! What the heck? Like I said, computers are weird.)
Posted by Eolake Stobblehouse at Sunday, April 08, 2007