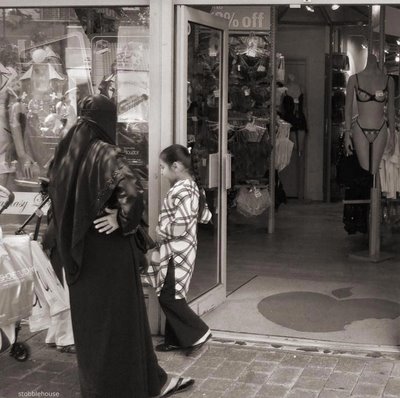 Interesting how assumptions work, isn't it? That these women don't show skin in public doesn't say anything about what they do in private, though, and many are actually quite open-minded.
Just go to a bazar in a muslim country where lingerie is sold openly right next to kitchen utensils and vegies, and women show no hesitation whatsoever to check out and discuss the wares.

Are you saying that a culture which is fiercely oppresive of showing the female body is not necessarily oppressive of healthy sexuality?

I'm saying that the fact that these women obey to the rules imposed on them doesn't say anything about what they think, or what they do in the space where those rules don't apply, i.e. within their family home.

Or what they wear under their burka, for that matter.

I know for a fact that many muslim women are very much into fashion, and not just academically - they wear the stuff. That you cannot see it doesn't mean it's not there.

I think some of these oppressive rules are a misguided attempt to make it easier for men not to "desire thy neighbour's wife", but there's nothing saying that she shouldn't make herself more desirable to her hubby.

The problem these cultures have is not with women wearing lingerie, rather than being seen in it by anyone else than their man.

Oh, and should you happen to come to Sinai for holidays you will find quite a few Saudi women - only that you wouldn't know because they wear bikinis - but that's a different story altogether...

I just remembered that I once talked to a woman who spent some time in a harem (as a visitor, because that was the most viable option to accommodate her in that country). She said that the women there were quite witty and self-confident, and quite openly made fun about their "master" amongst themselves.

I don't mean to defend any sort of oppression rather than just point out that lack of information tends to lead to assumptions, which reflect solely our own ideas and may or may not have anything in common with reality - we can only know once we get some facts.

There you go. ;-)
And once you've made that investment (think of all the platinum partner cards) you certainly want to make sure that no other guy looks at them too closely when they go out shopping...

I can see that.

Protecting them is one thing, keeping them loyal to you another. How are you going to go about that? Locking them away for good might keep them secure, but loyal?

In any case what you say seems to support what I said earlier about desire, so do you think they have a point? ;-)

The only question I have now is where/how do I learn the ropes/acquire the power to start building my own harem? :-)

You may be well adviced to start by moving to a place where it is legal. :)

One more thing I wanted so say: nice shot!

I like the juxtaposition between the two figures which are very contrasting on many levels - besides the obvious differences in clothing just look at the postures which work exactly the opposite way. And then the young girl walking right through it.

Well spotted, and nicely composed, if you ask me.

I think the title of the picture is wrong :)
Its not a clash. Thats how the world is.
Even the molecules "clash"es, to build a substance. Otherwise there wouldn't be the elements we live on.
I'd have alternative titles for this picture.
Like "2 colors"

Thanks for all your comments today.

I don't agree with the concept of devising burka, what should men do is look at other wives without lust but admiration which will do no harm to anyone. The necessity of harlems will be negligible then.