Some may not like the unusual form with the edge I gave the grip featured below (it was partly necessitated by the shaped of Olympus' embryonic grip-shape on the body). So I decided to update an earlier grip which worked great, but I was never happy with the look. It looks better now with the Skateboard Grip Sheet (Amazon), and it of course works even better too. (The grip that stuff has...)

I have actually made it on top of a pretty flat and useless grip I bought from Olympus, so in this case there's no doubt whatever that I can get it off again without remains.  :-)
Here is a grip/ridge I made for tablets before I found the SG sheet.

Also, to reiterate: Such a grip, if you have followed instructions about putting on Sugru, will not fall off in your hand. It's a cousin to super-glue, crazy strong. (Sugru tips.)
(btw, I have just modified the top to have a stippled, almost fuzzy, surface. It meshes better, and it hides the unevenesses which I had to give up removing totally.)

I must say, that in terms of pure grip functionality (if you don't count the big, integrated grips on the big SLRs) this is far better than any commercial grip I have tried.) 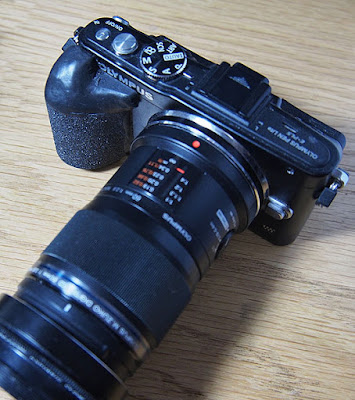 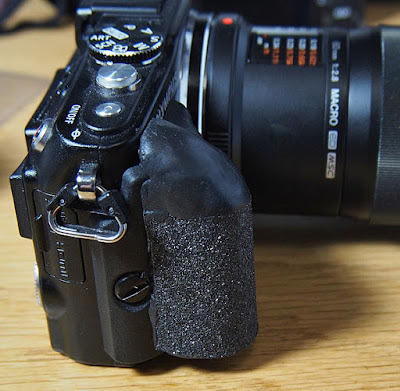 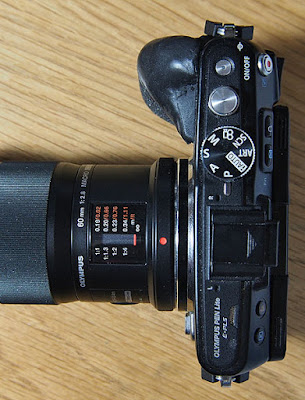 Below, alternative surface, made with light stippling with toothbrush. It makes it mesh better and hides unevennesses (which can be tricky to get rid of). 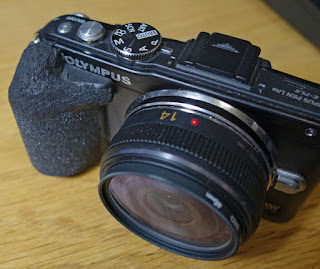 By the way, on both cameras, I have also put the Sheet on the little, flat thumbgrip on the backside. Makes it easier to find with your thumb, and improves the hold yet a little bit.

After it cured fully (24 hours), I tried to rip the grip off. Okay, not with my full strength, I am a quite big fella after all, but I couldn't budge it. There was not a hint that this was not there to stay.
Posted by Eolake Stobblehouse at Wednesday, October 07, 2015

I'm going to get a packet of the stuff, just looks fun to play with!

Where'd you get the skateboard grip sheets please Eolake? UK source I hope!

ES: It's damn fun to play with.

Amazon UK or USA, probably others too.

Limits to play fun: the price, and the fact that when it is set, it's done. So I find it more fun when you have some projects.
When I have something left of a mini-pack, I sometimes made a new coat-hook somewhere in the apartment. I use them for belts, shirts, earphones...

But there are a ton of ideas, just surf on Sugru.com

That makes me go a big rubbery one.

btw, I have just modified the top to have a stippled, almost fuzzy, surface. It meshed much better, and it hides the unevenesses which I had to give up removing totally.

Ming verifies he put it there for focus purposes down in the comment thread.