Phoebe Cates (screenshot from Fast Times At Ridgemont High). The most underused film beauty from the eighties? 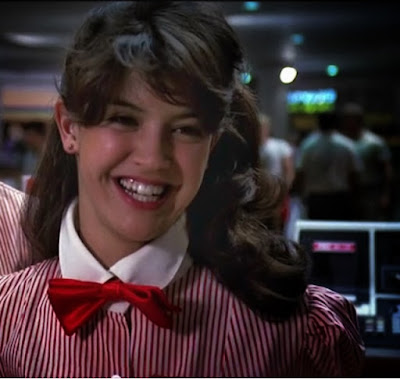 Iconic is the word! Best bikini scene ever. She's a goddess.

How can we forget the iconic slow-mo swimming pool fantasy scene in Fast Times at Ridgemont High with The Cars, Moving in Stereo playing in the background?

Probably could fill the pool.

For someone who always leaned heavily towards the brunettes, it was always a close call between Phoebe Cates and Mia Sara (Sloane Peterson in Ferris Bueller's Day Off). Phoebe was more of the girl next door type, while Mia portrayed the classy, rich girl from the Lake Shore.

Oh yes, Mia was gorgeous. Funny coinkidink, a day or two ago I saw a recent photo of her, still looks good.

They're both still very "bangable," to use the parlance of our time.

Ya, that bastitch Kevin is one lucky Dirty Old Man.
Good for him.
Though if he's a reason she appeared in so few films, grrr.